Following a worldwide search for inspiring candidates from the global netball family, World Netball has announced Director of Sports and PE teacher Sara Donovan as its official Courage Ambassador.

Standing alongside fellow ambassadors, who will comprise of globally recognised athletes, officials and sporting figures, as Courage Ambassador Sara will be a powerful advocate for netball as it moves into an exciting new chapter following World Netball’s recent rebrand (formerly known as the International Netball Federation) and the unveiling of its new strategic plan and vision for the sport. 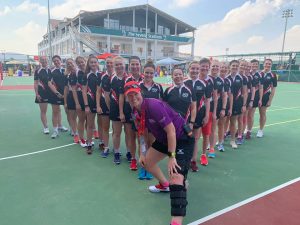 Narrowing down over 350 entries, a judging panel chose Sara to stand alongside fellow ambassadors, as she perfectly embodies World Netball’s Courage Value with bravery, decisiveness and perseverance.

Always a keen netballer, Essex-born Sara played from a young age in the UK and played for Team Bath whilst studying for her PGCE. Sara qualified as a PE teacher in 2000, moving to the UAE in 2009 with a desire to raise the profile of female sports in the Gulf. Whilst working in Al Ain, Sara introduced netball to many Emirati and expat girls in the region and went on to coach a women’s team in her spare time.

After a move to Dubai in 2015, Sara became the chair of the Dubai Netball League and helped increase membership and access to netball for almost 300 women. Sara set up the 7s Netball tournament at the Dubai Rugby 7s, showcasing netball in the Gulf and on a global platform, building the competition globally, with teams competing from within the Gulf Cooperation Council as well as the UK, Sri Lanka and South Africa.

In December 2017, days before the third year of netball at the Dubai Rugby 7s tournament, Sara was diagnosed with stage 3 breast cancer at the age of 39. Just before this diagnosis, Sara was selected for the first ever UAE netball team. Not letting her diagnosis stand in her way, Sara began chemotherapy in January 2018 and went on to play for the UAE team in the Netball Europe Open Championship in Gibraltar in the May. Whilst battling cancer, in the midst of a chemotherapy programme, she was the starting shooter in the Netball Europe competition where the team made history, bringing home the bronze, scoring almost 200 goals in four games. Sara represented the UAE again after a double mastectomy in May 2019. 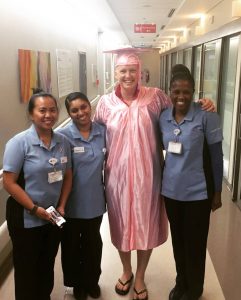 In total, Sara has had 16 sessions of chemotherapy, a double mastectomy, 25 sessions of radiotherapy and reconstructive surgery, and has remained playing, coaching and teaching throughout. She raises awareness of breast cancer and fundraises using her personal experience. In her spare time Sara can be found completing triathlons, scuba diving and running – one of her biggest accomplishments is the London Marathon.

In recognition of her embodiment of a core World Netball value, Sara will have a role at the Netball World Cup 2023, South Africa in a once-in-a-lifetime experience to be part of the global, iconic event.

Sara said: “It is a huge honour to have been selected as World Netball’s Courage Ambassador. I have my close friends and netball family to thank for my nomination and feel so grateful so have an amazing network of women that have supported and continue to support me.

“Although I would never think of myself or my actions as courageous, I am delighted to step up as Courage Ambassador. Netball is a sport that offers so much to so many, but has given me so much more than I can put into words during some challenging times.”

World Netball CEO Clare Briegal commented: “We were inundated with incredible nominations for the role of Courage Ambassador, and whilst it was a difficult choice, Sara was the standout candidate.

“Sara is truly an exceptional member of the netball family. From increasing access and awareness of netball overseas, to her amazing coaching work and remarkable bravery in the face of a cancer diagnosis, we couldn’t think of a better fit for this role. We’re delighted to welcome Sara as one of our official ambassadors, and we’re really looking forward to working with her.”