Great Britain’s women will fight for a bronze medal at the Tokyo Olympics after suffering a semi-final defeat to The Netherlands. 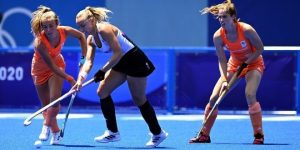 The reigning world champions were at their brilliant best with two goals inside a minute giving them a 2-0 lead going into half-time.

It was a ruthless showing from the Dutch who had two more just eight minutes after the restart to put them firmly in the driver’s seat.

Though Giselle Ansley did bring one back for Great Britain, the damage had already been done with the team falling to a 5-1 defeat as Frederique Matla ended any hopes of a late comeback.

The result means that GB will contest the bronze medal match on Friday 6 August and will face the loser of today’s second semi-final between Argentina and India.

Chances were few and far between in a hotly contested opening quarter. The Netherlands coming closest from a penalty corner at the very end of the opening fifteen minutes in which alert goalkeeping from Maddie Hinch would keep the scores level.

As time wore on, The Netherlands showed their ruthless side with a quickfire double early in the second quarter. A weaving run and lay off from Laurien Leurink found Felice Albers to fire beyond Hinch from close range to open the scoring.

Less than a minute later and the team were in again. This time Marloes Keetels finding time and space to rifle the ball into the bottom corner of the goal with a brilliant finish to double their lead and stun GB.

Mark Hager’s side showed signs of life and continued to fight to try and get back into the game. The team enjoying spells of possession deep in the Dutch half but struggling to break down the resilient defensive line.

The Netherlands were clinical come the second half and doubled their advantage just eight minutes after the interval. Marloes Verschoor got a wicked deflection from a penalty corner to score two minutes after the restart before Felice Albers made it 4-0 with her second goal of the game.

Minutes later, Sarah Jones surged forward on a powerful run to earn a penalty corner, from which GB responded to the deficit through Ansley’s magnificent drag flick to bring one back.

The team continued to press to get back into the game and looked to have won another penalty corner only to see it overruled following a video umpire review.

Though Maddie Hinch had impressed throughout with several impressive saves, she was unable to deny Matla from finding the fifth as the forward fired in from a penalty corner.

Despite being four down, GB persisted to push forward to look for a way back into the game. Ansley flashed another drag flick narrowly wide before a second penalty corner routine was unsuccessful as the team showed glimpses but couldn’t quite find the end product needed.

But it would be the reigning world champions who would take victory with an impressive performance to see them through. The result means that GB will face either Argentina or India on Friday 6 August in the bronze medal match.

After the match, Hannah Martin commented: “We’re disappointed. We wanted to keep it tight for as long as we could but unfortunately those two goals came in quick succession. We knew we could bring it back, but it wasn’t to be today.

“I think there wasn’t enough sustained pressure, we knew if we could keep getting at them then they would go in, but we just didn’t quite do that today. I’m bitterly disappointed but we’ll come out fighting for that bronze medal.

“I think we always believe we can get back into a game. We said to take it one goal at a time, we were really pleased with Giselle’s brilliant flick and thought we could get a couple more. But as I said, it was disappointing and it’s gutting to be in this position, but we’ve got to pick ourselves up and fight for that bronze.

“No excuses today. They’re a very strong team, we know that, but we’re disappointed to not get a result.”

Maddie Hinch also commented: “We need to look at what we got wrong today but also believe that we’re still a good side and that there’s a reason we’re fighting for a medal here – we haven’t done that by luck. We just need to believe that we’ll come home with it and not overthink this too much, they’re an unbelievable side who will punish you if you get things wrong. It’s a learning and it wasn’t our day today.

“Their goals today were world class, and you sometimes have to just say “you know what, they were better than us today and that’s that”.

“We’ve got to be proud of why we’re here, why we’re fighting for a medal in the first place and believe we can do it. That’s one thing we learned from Rio. It’s the power of belief, the togetherness, and the ability for everyone to play their part to get there because whoever we play next, it’s going to be tough.

“Given the whole cycle, Covid-19, a change of coaches, there’s so much this group has been through so the bronze would be massive for us.”