New Zealand beat France 26-12 to win the women’s Olympic rugby sevens gold medal at Tokyo Stadium on Saturday as the top seeds finally achieved their Olympic dream after disappointment in the previous Olympic final at Rio 2016. 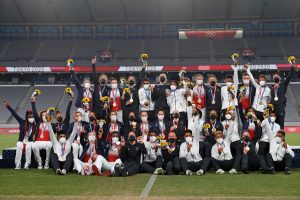 Following the medal ceremony the New Zealand players laid down their gold medals and performed a spine-tingling haka on the Tokyo Stadium pitch to bring down the curtain on a superb six days of Olympic rugby sevens action that has showcased the very best of the sport, which was making its second appearance on the Olympic programme.

Having lost the gold medal match to Australia five years ago, the Black Ferns Sevens had spoken about their desire to go one better in Tokyo, and captain Sarah Hirini helped give them the ideal start as she offloaded to Michaela Blyde who scored the first try of the final.

Gayle Broughton produced a stunning finish in the left corner before Stacey Fluhler went over in the final minute of the first half to give New Zealand a 19-5 lead at the break.

Anne-Cécile Ciofani scored her seventh try of the tournament to draw France within seven points early in the second half, but Tyla Nathan-Wong went over to make sure of the gold medal for New Zealand.

New Zealand captain Sarah Hirini said: “I think back to everything we’ve had to do to get to this moment, all the people back home who helped us, players who missed out but also trained hard. Everything people went through to win this, it’s pretty crazy and something you look at your teammates and think, we finally did it for New Zealand.

“We’re the best team in the world, we’ve got the best players in the world, and when you look around at that group it’s just, do your job and everything will happen. It did in that final.”

New Zealand’s Portia Woodman said: “Looking back on Rio, that emotion of scoring the last try but still not being able to win the game. Crying underneath the posts was one that I looked back on, but now it’s gone. Not when I look at this gold medal. When that whistle blew, I was elated with so much emotion, that left my mind. I looked at everyone on the field and had a real experience and feeling of happiness.

“Women’s rugby has been on the rise, not just in New Zealand, but across the world. Knowing I’ve hopefully inspired some of our girls, and even our boys look up to us, this is for rugby all across New Zealand, every kid who has aspired to be someone, looked up to someone, in every aspect of life.”

New Zealand’s Michaela Blyde said: “New Zealand is a strong rugby country so for us to be able to bring this gold home to our country and our families makes us extremely proud.

“We wanted to do the hard work, get up early and do those extra fitness drills – whatever it takes to be able to win one of these gold medals. One of the things we had to do was to be away from our families for the past six or seven weeks, and it’s been mentally hard. It’s not something we’re used to, but it’s worth it when you’ve got one of these around your neck.”

New Zealand’s Tyla Nathan-Wong said: “It has been a dream since we were kids to have a medal round our necks after all these years. It’s bloody incredible, it means so much.”

New Zealand’s Ruby Tui said: “I’m so happy, so proud. The gold is a metaphor for a dream about positive thinking. It is not just the gold medal but how we have grown since. You just have to believe.”

Despite defeat, France can be proud of their effort in winning the silver medal at Tokyo Stadium, having only qualified for the Games through the World Rugby Sevens Repechage last month and their place on the podium will boost interest in rugby sevens ahead of the Olympic Games Paris 2024

France captain Fanny Horta said: “We have to be proud of what we have achieved. You need to be able to congratulate yourselves if you are on the podium at an Olympic Games, irrespective of the medal. I am sure with this medal, the desire for revenge will be great.

“I think it has been a beautiful story and hopefully it continues. This is the first medal France has won in sevens and I hope this gives young girls the desire to start playing rugby and to get to the Olympics. Maybe next time we can win the final.”

France’s Caroline Drouin said: “We wanted to win the gold and right now we feel really disappointed. But maybe in the future we will feel happy about winning the silver. Getting here was tough – there was a lot of hard work involved and it wasn’t easy. But right now I feel very proud of the team.”

New Zealand had booked their place in the gold medal match with an extraordinary 22-17 defeat of Fiji after sudden-death extra-time, Broughton touching down to win one of the all-time great sevens matches.

France, meanwhile, were grateful to a Ciofani brace as they overcame Great Britain 26-19 in the second medal semi-final.

Fiji recovered from their semi-final disappointment to win a first women’s Olympic medal, and only their country’s third ever, as they beat Great Britain 21-12 in the bronze medal match.

Great Britain dominated possession in the first half but found themselves 14-0 down as Alowesi Nakoci scored two stunning tries.

Megan Jones went over to give Team GB hope, but Reapi Ulunisau scored her eighth try of the tournament to give Fijiana what proved an unassailable lead. Jones again touched down in the closing stages, but it was nothing more than consolation.

Earlier on Saturday, Australia gained a modicum of revenge for their pool defeat to the USA, as they beat the Americans 17-7 in the fifth-place play-off on Saturday.

Faith Nathan and Madison Ashby gave Australia reward for their dominance of possession in the first seven minutes as they went over at the end of the half to give Australia a 10-0 lead at the break.

The Rio 2016 gold medallists had blown a two-score lead when the teams met in Pool C and their nerves were tested when Kristi Kirshe touched down to help reduce the deficit to just three points.

But, Australia made sure of fifth place with around 90 seconds left as Demi Hayes finished off a fine team move under the posts.

Australia had booked their place in the fifth place play-off with a 35-7 win against the Russian Olympic Committee team (ROC), while the USA had seen off China 33-14.

In Saturday’s second session, China came from 10-0 down to beat the ROC 22-10 and finish their debut Olympic sevens campaign in seventh.

ROC captain Alena Tiron and Kristina Seredina crossed in the opening five minutes to hand their side the perfect start, but the momentum swung China’s way when Marina Kukina was shown a yellow card.

Wang Wanyu and captain Yang Min touched down with the ROC down to six players, before Xu Xiaoyan and Chen Keyi — with Daria Shestakova in the sin-bin — put the seal on victory late on.

Bianca Farella scored two tries as Canada ended their Tokyo 2020 campaign on a high with a 24-10 defeat of Kenya in the ninth place play-off.

Farella crossed the whitewash in each half, the second coming while Canada were down to six players, to take her Olympic try tally to eight and help her side see off a spirited Lionesses display.

Bianca Silva made two telling contributions to help Brazil beat Japan 21-12 in the opening match of day three, and secure 11th place in the process.

The hosts led 7-0 and 12-7, but Silva’s try edged Brazil in front on the stroke of half-time, and the World Rugby Unstoppable then produced a telling turnover late on to start an attack that ended with Marina Fioravanti touching down.