Track and field athletes Sophie Kamlish and Polly Maton yesterday became the latest University of Bath-based sportspeople to be selected for the Tokyo 2020 Paralympic Games. 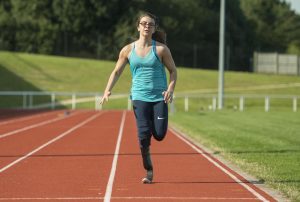 Former World Champion Kamlish, from Bath and coached by Rob Ellchuk, is no stranger to the Paralympics having competed at both London 2012 and Rio 2016. She set a T44 100m world record at the latter Games but narrowly missed out on a medal in the final. She will contest the T64 100m this time round, plus the 4x100m Universal Relay in which she helped GB win silver at this year’s IPC European Championships.

Maton, from Devizes and coached by Colin Baross at the Team Bath Sports Training Village, will be competing at her second Games having made her debut at Rio 2016. She will contest the T47 long jump, an event in which she has won World and European medals.

Today’s selections mean that seven sportspeople who train at the University will be competing at the Tokyo Games next month, with Kamlish and Maton joining paratriathlete Michael Taylor, double Paralympic swimming champion Stephanie Millward and wheelchair fencers Dimitri Coutya, Piers Gilliver and Oliver Lam-Watson in the ParalympicsGB squad.

Twenty University-based sportspeople are also competing at the Tokyo Olympic Games, which begin on Friday. Visit teambath.com/Tokyo2020 for full details.