ParalympicsGB has confirmed the selection of four Para equestrian athlete and horse combinations to compete at the rescheduled Tokyo 2020 Paralympic Games. 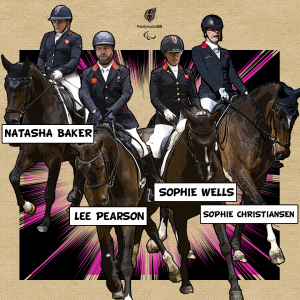 All four riders are defending Paralympic champions, most recently having represented ParalympicsGB at Rio 2016 and London 2012, while the horses all make their first Games appearance.

Sophie Christiansen (Grade 1) has competed at every Paralympic Games since Athens 2004, winning a total of 10 Paralympic medals, including eight golds. She will partner Innuendo III, known as Louie, in her first championship appearance since the Rio 2016 Games.

“Being selected for my fifth Games is unbelievable,” commented Sophie. “The Paralympic movement changed my life when I went to Athens 2004 when I was just 16 years old. I hope Tokyo 2020 will inspire others in the same way and put disability awareness at the forefront of people’s minds again.

“The standard of Grade 1 has shot up in the last couple of years and it has not been an easy cycle but, whatever happens, I’m so proud of the home team I have created and the horses I have trained.”

Tokyo will be a sixth consecutive Paralympic Games for Sir Lee Pearson (Grade 2), and this time he will pair with Breezer. Lee has previously won 14 Paralympic medals, 11 of them gold, and is hoping to continue this winning formula with his homebred horse.

“With the year we’ve had, it seems quite surreal to be selected from my sixth Paralympic Games,” commented Lee. “I’m unbelievably excited and I’m very proud of Breezer, who has pulled out all the stops this year throughout qualification and selection. Thank you for all my supporters and I wish all the athletes a safe journey and competition. I can’t wait for the Games to begin.”

Natasha Baker (Grade 3) and Keystone Dawn Chorus, known as Lottie, will be bringing girl power to Tokyo as the only all-female combination on the squad. Despite being the newest partnership, they head into Tokyo on the back of some impressive national and international results. Tokyo will be Natasha’s third Games, having previously won a total of five gold medals from London and Rio.

“It feels incredible to be back competing for ParalympicsGB – I feel so honoured and so lucky to be selected for my third Games,” said Natasha. “Lottie and I have had a great year together so far and, although it’s still early in our partnership, I can’t wait to see what we can do over in Tokyo. This will be Lottie’s first time away from British soil, but I’m sure she’ll be an absolute superstar. It’s a massive honour to be representing my country again, especially given everything we’ve been through in the last year and a half. Everyone has been through a really tough time, so to have this feels like such a celebration and it shows that hard work pays off. We can’t wait to get out there and do our best. I’d like to thank Lottie’s owners and my coaches for all their support, and of course the selectors for having faith in me again.”

Sophie Wells (Grade 5) returns to the ParalympicsGB squad with the experienced C Fatal Attraction, known as Jorge, who she rode to the podium at the FEI World Equestrian Games in 2018 and FEI European Championship in 2019. Sophie has previously ridden for ParalympicsGB at London 2012 and Rio 2016, winning six gold medals in total. It feels quite surreal to be going to my third Paralympic Games, to be honest, especially after everything that’s happened in the last 18 months,” comment Sophie. “We’ve worked really hard to get here and it’s very exciting, so now we just need to keep working hard until we get to Tokyo.”

While all four combinations will compete for individual honours, three will also contest the team competition. The decision on this will be made on arrival in Tokyo.

Para equestrian’s Team Leader, Georgina Sharples, commented: “We have faced a number of challenges and all our combinations have had limited international outings over the past 18 months. However, the four selected athletes are seasoned campaigners and have drawn on their wealth of experience to ensure that they and their new equine partners are ready to perform in Tokyo. ParalympicsGB has a stellar record in para equestrian, but we can’t afford to be complacent – other nations have been making great strides since Rio and will be breathing down our necks in Tokyo. Medals won’t be easy, but we’re determined to push towards the podium.”

Penny Briscoe, ParalympicsGB Chef de Mission at Tokyo 2020, said: “It is brilliant to see such experienced and successful athletes return to compete for ParalympicsGB at Tokyo 2020. They have all demonstrated they have the talent and determination to succeed on the biggest stage of all, and I can’t wait to see these new rider and horse combinations in action. I also want to take the opportunity to recognise the incredible resilience of each of these athletes and their support staff during this challenging period – we are now looking forward to travelling to Tokyo and delivering outstanding moments to inspire the nation.”

Around 230 athletes from 19 sports are expected to make up the British team that will compete in Japan, with further names to be announced in the coming weeks.

ParalympicsGB captured the imagination of the British public at London 2012 winning 120 medals in front of sell-out crowds with countless memorable performances.

The team eclipsed that performance at Rio 2016 winning an outstanding 147 medals including 64 golds to finish second in the overall medal table. The rescheduled Tokyo 2020 Paralympic Games will be staged from 24 August to 5 September.