Below are facts and figures about WNBA All-Star 2021: 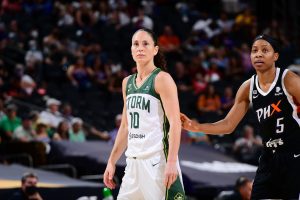 · 1 – No. 1 all-time leaders for points (Diana Taurasi – pictured above), assists (Sue Bird) and rebounds (Sylvia Fowles) will be playing in the WNBA All-Star Game.
· 2 – Las Vegas will host WNBA All-Star for the second time, having previously done so in 2019 when the game was last played.
· 3 – Three international players will be competing in this year’s event: Liz Cambage (Australia), Jonquel Jones (Bahamas) and Satou Sabally (Germany).
· 4 – The Las Vegas Aces have the most All-Star selections with four, followed by four teams with three players each (Chicago Sky, Connecticut Sun, Phoenix Mercury and Seattle Storm).
· 7 – Out of the 24 All-Stars, seven players have competed in the WNBA for more than a decade: Sue Bird (18th season), Diana Taurasi (17th), Sylvia Fowles (14th), Candace Parker (14th), DeWanna Bonner (12th), Tina Charles (11th) and Courtney Vandersloot (11th).
· 8 – This year will feature eight first-time All-Stars: Ariel Atkins, Kahleah Copper, Dearica Hamby, Brionna Jones, Betnijah Laney, Arike Ogunbowale, Satou Sabally and Courtney Williams.
· 12 – Sue Bird has been selected to a WNBA-record 12 All-Star teams.
· 17 – Naismith Memorial Basketball Hall of Famers Lisa Leslie (8) and Tina Thompson (9), who will serve as co-head coaches for the WNBA All-Stars, combined for 17 All-Star selections during their playing careers.
· 1999 – The first WNBA All-Star Game was held in 1999 at New York’s Madison Square Garden, where All-Star MVP Lisa Leslie led the West past the East 79-61. 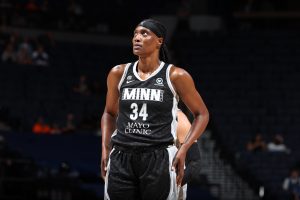 WNBA All-Star on ESPN
· 7 – ESPN play-by-play announcer Ryan Ruocco and analyst Rebecca Loco will call their seventh WNBA All-Star Game together.
· 10 – ESPN sideline reporter Holly Rowe will be covering her 10th WNBA All-Star Game.
· 15 – ESPN will use 15 cameras, microphones on players, and from-the-bench, in-game interviews throughout its telecast.
· 17 – This year marks the 17th time that ESPN networks will present the WNBA All-Star Game.

WNBA All-Star in the Community
· 25,000 – The WNBA FIT All-Star Grocery Pop-Up is providing 25,000 meals to 1,000 families in July. As part of WNBA FIT Month presented by Kaiser Permanente, the league is hosting five grocery pop-ups in partnership with Goodr, including an All-Star Event in Las Vegas on Tuesday, July 13. The Official Health Care Partner of the WNBA, Kaiser Permanente serves as the health care expert and strategic consultant for the WNBA on health and wellness initiatives. Goodr is a sustainable food waste management and distribution company whose mission is to feed more, waste less.

Courtesy of the WNBA via Pitch