Having suffered a number of serious injuries in recent years, Emily has taken the difficult decision to step away from the Great Britain centralised programme for the benefit of her long-term health and wellbeing. 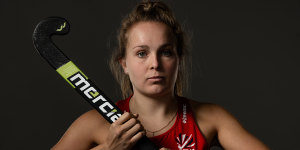 The 2018 Commonwealth Games bronze medallist has made the decision with the full support of the medical team and everyone involved with Great Britain Hockey.

Emily said: “It has been an absolute honour to have represented Great Britain and England over the last four-and-a-half years. At the age of 26, this is not a decision that I thought I would have to be making, nor one I have taken lightly, but having pushed my body to the limit, I know this is the right decision.

“I am so proud to have been a part of this squad and what we have achieved on the pitch, as well as the adversity we have overcome off it. I will forever be grateful to my team-mates, our support staff and everyone involved at Great Britain Hockey for making this such a wonderful chapter of my life.”

Emily made her international debut for England on 25 February 2017 before pulling on the GB shirt for the first time against Argentina on 10 February 2018. She made a total of 55 international appearances (36 England, 19 Great Britain) and won three bronze medals with England.

Her involvement in elite sport won’t be coming to an end there though as Emily will soon be starting a job in the Communications department at West Ham United FC, a club close to her heart.

Ed Barney, Great Britain Hockey’s Performance Director, said: “It is with a heavy heart that we see Emily step away from international hockey but it is a decision that we know is well considered and ultimately right for her.

“Over the past four and half years Emily has brought enviable passion, dedication and commitment to everything that she has done. Her bubbly and vivacious character has been so valued by players and staff alike.

“With such commitment to dual aspirations, Emily is a shining light to all of her peers in the sport – it is fabulous to see such a seamless transition to a fantastic role and something that she should take a huge amount of pride in. Emily has set fantastic standards both on and off the pitch and will leave a genuine legacy in aspects of our equality, diversity and inclusion work and I hope that we continue to work closely with her over the coming years.”

England and Great Britain women’s head coach Mark Hager added: “Emily’s commitment to the Great Britain and England teams will be greatly missed. Emily not only drove standards on and off the pitch but she was also a versatile player that left no stone unturned in her pursuit of excellence.

“Emily was a player that could read a match and change the momentum of a game by her ability to win possession under pressure and turn the momentum in her favour from her drive to compete in any contest.

“The laughter Emily bought was infectious and I know staff and her team-mates will miss having her around; her ability to bring a group together was valued so much by the staff and players.

“I can’t thank Emily enough for her commitment to the programme and wish her much success in her new adventures.”

Great Britain Hockey would like to thank Emily for everything she has given our sport over the last four-and-a-half years and we wish her the very best for the future.