This round showed the RHF in its best light. The England squad had flown the nest, but there were still plenty of players left with international experience to show the way. Now we could sense the depth of quality across England’s shires.

They shouldn’t have lost their game at Headingley. They batted very well to reach the biggest total of the four first innings. Bryony Smith, captain today, and Alice Davidson-Richards again opened with a 50-stand, but owed most to Kirstie White with her 73. Aylish Cranstone (42) and Phoebe Franklin (28) hit about them merrily at the end to pass the magic 250 mark.

That total looked impregnable as five of the top six home batters were dismissed with only 70 on the board, but Stars failed to deal with Sterre Kalis, the young Dutch talent (76), who found a valuable partner in Jenny Gunn (50). When Grace Gibbs had Kalis brilliantly run out, that should have been game, set and match. But no, Beth Langston, like all good quick bowlers, fancied herself as a top-rank batter and produced the goods (59*).

Despite the efforts of the two Surrey spinners, Smith and especially Danielle Gregory (10-1-31-2), the gap went on closing. Sad to relate, it was Stars’ opening bowlers, asked to sort the death overs, who presented the game to the hosts on a plate. A sequence of wides, full-tosses and long-hops helped Diamonds complete their third win.

They have suffered the biggest fall this year. It was their misfortune to face the champions when shorn of Heather Knight. A total of 177 was inadequate, thanks to fine bowling by Charlie Dean (3-27). Georgia Adams chose this game to get her batting back on track with 77, supported finely by Maia Bouchier 57*. It turned into a veritable walk in a Taunton park. 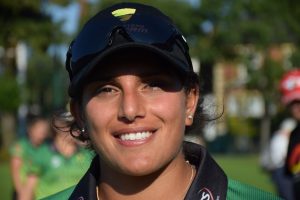 They had to work harder to overcome Sunrisers who showed a lot of determination in topping 200. But too much was left to Naomi Dattani (65) and Kelly Castle (52) with their stand of 87 for the fifth wicket. Eight other batters could muster only 35 between them.

Sunrisers’ less than venomous attack let all six of Lightning’s top batters get a start, the way home led by Michaela Kirk (57) and Abi Freeborn (44).

They couldn’t complete a fourth straight win against Thunder. In Amy Jones’ place as top scorer, skipper Eve Jones compiled a labour-intensive 100* which was not without its occasional lucky breaks.

Thunder deserve congratulation on scraping past the asking total with two wickets in hand, the pitch coming in for adverse comment from both sides. More on that here…

Players have been delighted to find themselves appearing on county and especially test grounds. The drawback is, the squares take a pounding in the course of a season. Groundsmen are stretched to prepare new strips for an unforgiving sequence of matches. Although we are still much nearer the start of the season than the end, the pitch at New Road was well worn and misbehaved disconcertingly.

This is a dilemma that has no easy answer. One advantage of county outgrounds is that the groundsman can set aside a strip for the one 4-day county match he has on his calendar. Not so his pal at headquarters. RHF players will be very lucky if they are offered an unused pitch for their 50-over game. Still, the ECB will no doubt be sending a pitch assessor along to see what went wrong.

The RHF now takes a long, long break till September, which is a pity.