As Principal Partner of England cricket, cinch is proud to help drive Women’s cricket forward, literally. The UK’s fastest-growing online used car marketplace showed its support for team members and their coaches by providing them each with cars to make the road to success that little bit easier.

cinch surprised the team at the National Cricket Performance Centre in Loughborough where they got to pick up their keys and collect their shiny new rides. 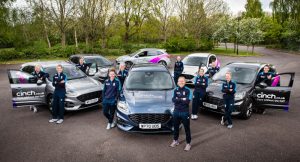 Commenting on the company’s gesture, Robert Bridge, Chief Customer Officer, cinch, said: “We wanted to show our support to the England Women’s cricket team by literally driving them forward. They’ve a lot of important fixtures over the coming months up and down the country and now getting there will be faff-free with their own cinch cars. We are all huge supporters of the women and wish them every success for the coming season.”

Heather Knight, England Women’s captain, said: “We’re really happy with our cars and there was a fair bit of excitement at Loughborough at the handover of the keys. It’s great to have cinch’s support and we really appreciate having them on board. We’ve got a busy few years ahead of us and we’ll be clocking up a lot of miles in that time so it’s nice to be able to do it with cinch’s support.”

As the new Principal Partner of England Cricket, cinch will be proudly displayed on the kit of the England team across Test, ODI and T20 appearances. cinch’s partnership includes and supports all England cricket teams including Women’s, Men’s, England Lions, Disability and England Age Groups.

Courtesy of cinch via Pitch