Yesterday the Birmingham 22 Commonwealth Games launched its campaign to find and recruit 13,000 volunteers (who will be known at the Commonwealth Collective). Joining the drive and helping to showcase both the event and the essential role of its volunteers is England netballer Ama Agbeze. 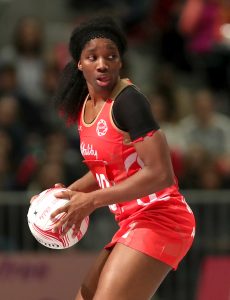 All sporting events rely on volunteers to some degree, but in order to stage a major competition, the largest sporting and cultural event ever to be held in the West Midlands and the biggest in the UK for a decade, it is the volunteers who will ensure that everything runs smoothly. All those roles whether it is showing attendees to their seats; ensuring athletes and their kit arrive in the correct location or preparing a venue – the kind of thing you only notice when it doesn’t happen.

All too aware of this is vastly experienced Ama, who captained Team England to an historic gold medal at the 2018 Gold Coast Commonwealth Games in Australia and received an MBE for her services to netball in 2019.

Not one to let the grass grow under her feet Ama has played for a variety of Superleague teams in England and also for three different franchises in Australia and is currently playing for Northern Mystics in New Zealand.

Ama is keen to show the world how friendly Birmingham is and very excited about the prospect of the home games. We are all hoping that by then life will have returned to a little more normality, crowds will be in and everyone will be able to enjoy the occasion.

Not content with her work on the organisational side of the Games Ama is keen to keep playing at elite level and would love to be picked to represent England with the Roses again (she is not quite ready to quite relinquish her mantle yet) and of course add to her tally of 100 caps.

The desire to continue competing is still there with the added incentive of playing in her home city.

The pandemic has been hard for all of us across the world, for athletes, members of teams used to the social side of training having to try and replicate gym work, or training drills alone has been tough – so good then to be able to look forward to a major event which will give everyone a lift.

As well as her talents on the netball court Ama also has a MSc in Finance and a Law degree.

Whichever direction life takes her I am sure she will excel – it was an absolute pleasure to be able to chat with Ama and I really hope I’ll be able to watch her play in Birmingham. We all wish her every success.

You can find out more about becoming a volunteer here.