The full time whistle blew, the travelling Harlequins support rose to their feet and on to the lush Kingsholm surface charged Jess Breach, in the exultation as fast on one leg as two, crutches long since tossed aside as she leapt into a teammate’s arms. Behind her came another wounded soldier, captain Rachael Burford, the pain of the knee injury that had forced her off inside the first 20 minutes hidden by the broadest of smiles as she joined her teammates to bask in the glory of triumph. For the first time Saracens had been toppled by their London rivals, the twice-reigning champions falling to a final defeat: a new name to be carved into the Premier 15s trophy. 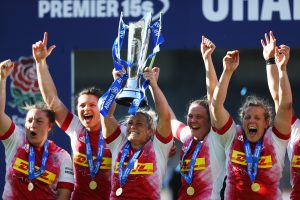 The flames blew high and the streamers settled beside them, glinting in the glorious May sun, and the Harlequins players gathered to hoist their prize. Burford duly obliged, throwing it high above her head thrice in quick succession, like a bugler sounding a triumphant silver trumpet to herald victory at the end of the toughest battle of a most challenging season.

When Burford was finally ready to relinquish her grasp on a trophy hard-earned, it was not to a teammate she passed the silverware, nor to head coach Gerard Mullen, a title-winner in his first season at the tiller. Instead, over was beckoned Karen Findlay, reluctant to break into the players’ party but dragged in nonetheless by a group that owe their outgoing forwards coach plenty.

This was to be Findlay’s final game at the club before she departs in the close season. The Scot is an immensely popular figure, and an influential one, too, a driving force for five seasons as Aylesford Ladies morphed into this Harlequins side and the Premier 15s came into existence with their place among the very best sides never in doubt even as faces came and went. Twice under Findlay co-leadership with former England head coach Gary Street they had fallen just short, runners up in the opening two editions to Saracens.

The beginning of the season saw a shift of roles for Findlay as Gerard Mullen took the reins, but she has remained a vital guide. No pack has been as destructive as Harlequins this season, with a steamroller of a maul, used to such effect in the final, and a phalanx of forward carriers to rival any, even after the midseason departure of newly-qualified firefighter Jade Konkel.

It was upon this group of forwards that this triumph was built. The big difference between the two sides at Kingsholm was breakdown physicality and accuracy, Saracens on the wrong side of referee Sara Cox early on and in their desperate scrambling to haul back a game, failing to right their discipline woes. A nine-point half-time Harlequins lead could, and perhaps should, have been more.

In a contest that threatened to boil over at points as great friends and foes collided, it was Harlequins that kept their heads the best, none more so than Lagi Tuima, producing perhaps her best performance since joining the South West Londoners. It was the centre who struck a brilliant final 40-metre nail in the Saracens coffin to seal a 25-17 victory.

And while Burford was quick to praise Gerard Mullen, a title winner in his first season at the tiller, it was for Findlay that she reserved her most effusive praise. It had been an “emotional week”, each said at full-time, but there had been no premature farewell, no switching off ahead of her departure. From minute one to minute seventy, even after dropping to 13 players, it was a study in execution from Harlequins, the physical and mental battle won against a side normally so dominant in both respects. For the first time on domestic rugby’s biggest stage, Alex Austerberry’s side were out-fought, out-thought, and out-Saracened, bruised and soundly beaten, with novel reflecting to be done after defeat.

Findlay’s influence has extended beyond rugby into the lives of a largely amateur group of players. For some, she has been a crucial cog in their very rugby existence, for many a friend and guiding light. She would like to stay in the game with diversity and inclusion in the sport high on her agenda: after some summer “Karen and family time” after 16 months away from her relatives.

In the minutes following their semi-final victory over Wasps, with the fans long since shuttled out the door, the Harlequins forwards assembled themselves in front of a camera or two for a photo, Sarah Beckett sprinting over to ensure she did not miss out on a final Stoop goodbye to the affable Scot. Under Findlay, players like Beckett have become true forces in a team full of difference-makers: take Shaunagh Brown, irrepressible on the pitch and on the microphone afterwards, or two-try Amy Cokayne.

Having lost Burford so early, for Izzy Mayhew to produce a faultless and decisive defensive performance spoke volumes to the depth and unity of the group. Burford revealed at full-time that even in the anguish of injury she was not fearful of another failure, such was her belief in a squad united by a year of so many battles on and off the pitch. For Findlay, it was the fondest, finest, and a most fitting farewell.