Two important women’s boxing contests feature on the Matchroom boxing card Devin Haney vs Jorge Linares which is taking place this Saturday, May 29, 2021 at Michelob Ultra Arena at Mandalay in Las Vegas, Nevada

“I’m delighted to be here, and I can’t wait to get in there Saturday and put on a show. I’m a natural fighter, I do what I do, I don’t talk much I just let my hands do the talking.

“I’m always spiteful but now it’s added a bit more spice into it. I can’t wait to get in there now and get down to the action.

“I’m not going to look past Melissa, she’s a former world champion and has got a lot of experience but I’m the better fighter. Things for me are going to go forward and I’ve got a long journey ahead of me – I’m not stopping here.”

Opponent Melissa Hernandez (23-7-3 7 KOs) had this to say on her challenge for the WBC World Super-Lightweight title:

“Saturday, expect fireworks. Women’s boxing is back to stay, I was one of the pioneers and I’m here to prove that I still have it and pay homage to all the women that came before me.

“We busted out asses for so long to finally be on these huge cards and to be getting paid more than we used to. When I was fighting, our purses weren’t even enough to pay our rent, now we have women building empires off it – it’s amazing to be here.

“To clear things up about the banter that went on between us, it was taken out of context by somebody chasing clout. I heard what I heard, at the end of the day, the fight is happening. I’m happy I had that extra time to train because she’s a badass, I’m here to prove that I’m a little bit more of a badass.” 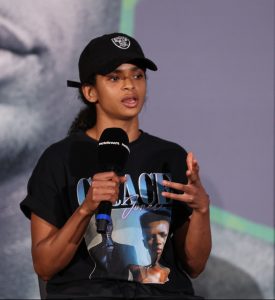 Ramla Ali: “I can’t believe I’ve been given the opportunity to fight in the boxing capital of the world, Vegas, so early on in my career. I can only feel grateful, humbled, and honored to be part of such an amazing card. I love Jorge Linares, I grew up watching him, I think he’s amazing and him versus Haney is going to be electric.

“I think there was a little twitter war going on this morning, someone took what I said out of context. What I meant was you’ve got these amazing fighters in the world, Lomachenko, Shields, Katie Taylor, who have done so much in the amateurs, won everything there is to possibly win, if they wanted to fight for a World title in their first fight, they’d be deserved of it. I want to feel deserved of a World title and to feel like a World champion when I feel ready. I don’t want to be pushed into it when I don’t feel ready.

“I’m really excited for when those opportunities will arise, I never shy away from a challenge and if fighting those girls means that it’s the next step to a world title then so be it.”