A totally gripping game between two of the finest sides on the planet. The only thing missing was a whirring scoreboard. Defenders stuck to their task heroically; inventive attackers had the greatest difficulty exploiting space.

Everyone expected a tight game, few such a low-scoring one. 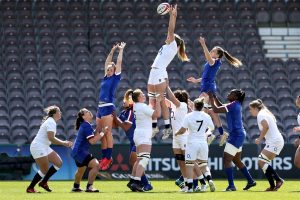 A strong swirling breeze upset the kickers, Emily Scarratt missing two pots at goal in succession to widespread disbelief. When she left the field after twenty minutes, you could sense the consternation on and off the field. The score was 0-0 and the hosts had that wind mostly in their favour. The midfield now read Rowland, Harrison, Tuima, three talented players, but when did they last play as a unit?

To every home supporter’s relief it had been an HIA for Scarratt which she passed. ‘What’s the score, Emily?’ ‘I’m pretty sure there hasn’t been any yet.’

The kicking from hand was of variable quality, most of it very fine; from the tee much less so. Like Scarratt, Caroline Drouin pulled her first chance to the left.

The pace of the game left the spectator breathless. We had already seen a French attack leave three of England’s front five strung across the midfield in defence; a sure sign that systems were being stretched.

When France were pinged for advancing early at a line-out, Helena Rowland put a fine kick into the corner. The French halted a driving maul to win a penalty. Indeed neither side brought that deadly weapon to a successful conclusion, a big surprise.

Shortly before half-time Rose Bernadou and Madoussou Fall were both hauled off the field. Both had done their job splendidly, so did their disappearance lead to England’s solitary try? They won a penalty inside the French 22. Poppy Cleall found the ball at her feet, tapped at once and drove in towards the posts. As she was hauled down she released the ball into the air; Zoe Harrison grabbed it and finished a millimetre short. A ruck followed and – guess who! – Cleall was there to burrow her way under more defenders to score. This A-B-A movement is familiar in football; on the rugby field, at such close quarters, it’s utterly remarkable. Cleall’s punishment was to receive a knock to her left shoulder.

This was edge-of-the-seat stuff, so tight was the contest, so tense. 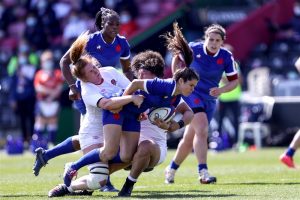 As the second half started, Cleall dropped Drouin’s kick-off. Was that arm nagging at her thoughts?

The French pack drove England off the ball yet again to win a penalty. Drouin’s kick pranged back off the left post into French hands. England offended again and Drouin had a second offer she didn’t refuse. (7-3) Now it was Bourdon for Sansus, one match-winner for another.

An England free-kick at a scrum put them on the front foot at last. After a neat set of phases Vickii Cornborough was called for a double-roll, an offence not picked up often enough.

Sarah Hunter made her 125th appearance on 53 minutes, not for Cleall, but for Abbie Ward, the vice-captain. Amy Cokayne, on at the same time, immediately made a big run, but in a parallel situation to a previous game in Grenoble, failed to set Jess Breach away. Breach, like Abby Dow, was to remain an onlooker in England’s attacks. Indeed Breach had her first run, of a handful of metres, on the three-quarter mark, and over on the left side of the field. Starved of possession.

Cyrielle Banet stayed on the field after getting a knock to a leg, but after fumbling a couple of catches, she was replaced by Jessy Trémoulière. This brought Emilie Boulard to the right wing, another new experience for the talented youngster.

On 69 minutes England crumpled at yet another scrum. Poppy Cleall paid the penalty; an aggravation to that arm injury and she was forced to leave after another magnificent performance. 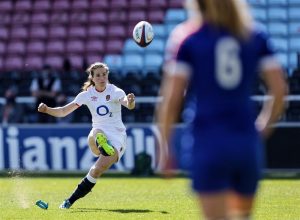 France thundered into attack using their heavy artillery, but the thin red line proved adequate. The ball popped loose, England claimed it and Rowland hoofed it clear.
Eight minutes left and France won a penalty in front. Gaëlle Hermet opted for three points and Drouin obliged, via the left post. (7-6)

From here on England played keep-ball; two Rowland penalties put them in reach of the line. France were found guilty of pulling a drive down. England went through several more phases before Hollie Davidson awarded the penalty. A nice easy one, right in front? Several of the previous ones had looked simple. only two had spilt the sticks.

But Scarratt has been in this position once or twice before, not least over the road at the Stadium in the 81st minute. Sure enough the kick was straight. And just like Katy Daley-Mclean in Pau last year, Rowland booted the ball over the stand to end a gripping final.

Player of the Final: Zoe Aldcroft 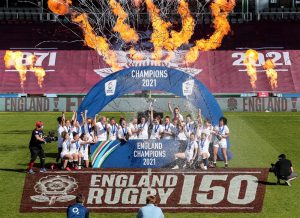 This was a game played at a furious tempo, with runners hammered down and tacklers bowled over backwards. The collisions could be 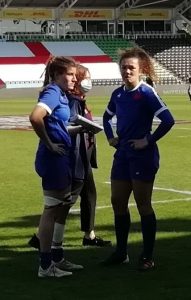 felt in the stands.

In one sense it wasn’t the game we expected: one single measly try when we had an unbelievable line-up of attacking backs: Banet, Boujard, Breach and Dow, to name only the flying wingers.

What an irony that next week’s match is termed a friendly. It will be fascinating to see who the selectors put on the field. Doubtless they wanted originally to spread the net wide, try new combinations, even new tactics. But the French go on smarting from a horrible run of losses; their eyes fixed on a home win, and Simon Middleton finds it hard placing victory as his second or third priority.

In one respect this table is likely to remain unique; only three games each. In another it remains obstinately familiar. The order is long overdue for shifting.