The pandemic and resultant lockdowns has been unprecedented and difficult for everyone, across all levels of society, whether old or young. The very young have been deprived of their friends and the elderly in many cases deprived of human contact and of course far too many have lost their lives.

We have seen extraordinary people do extraordinary things and, as in any disaster, it is has brought out both the best and the worst.

For athletes at all levels it has been incredibly difficult but many have found innovative ways to keep fit whilst facing unimaginable disappointment as events and opportunities were delayed, postponed and sometimes cancelled.

On our own pages we featured Imy Bantick winning a rowing gold medal from her kitchen!

Rachael Burford continued her Girls Rugby Club training via zoom to name but two examples of athletes overcoming difficulties and inspiring others. 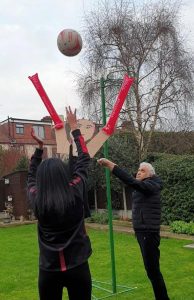 Ziana and the home made defender!

From netball Ziana Butt shared many examples of ways she had found to keep motivated and fit, with the help of her very supportive family and the now legendary homemade defender.

“The Covid-19 Pandemic broke and we entered lockdown in March 2020, as time went on, the initial feeling of concern and disappointment turned into a heavy weight in the pit of my stomach, as it became clear the pandemic was taking hold, people were getting really sick and the Netball Performance League tournament was one of many events that would not be going ahead.

“To stay motivated I focused on what I could do rather than think about what I couldn’t do. Recording podcasts, reaching out to schools to talk about being an elite athlete, creating videos that break barriers across franchises and professions, technical training and fun videos for social media. A few were a real hit, the one of the homemade defender always makes me smile, it attracted well over 7000 views on twitter which was quite incredible.

Saracens Mavericks put on a quiz night every Sunday for many months which was great fun and helped us to stay connected. As a squad we also did cooking competitions, various fitness challenges and more recently the FEBFRANCHAL which was a competition amongst all the franchises. My club Leyton were doing regular yoga which really helped as I was spending most of the day sitting at a desk doing remote learning for my A-Levels.

Returning to training earlier this year has been hard, the hope of match play has kept me going. I have completed numerous Covid-19 forms over the past year, I do four rapid flow tests a week now, two for school and two for England Netball. We have had a virtual medical consultation, various rules around face coverings, bubbles and more. I am just grateful that as an elite athlete I have been able to have this opportunity to continue to train in some form during lockdown. 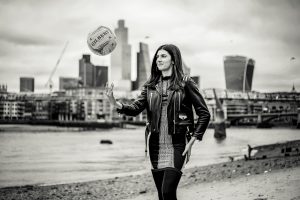 It has been a year of highs and lows and an opportunity for reflection. I was recognised as a mentor, volunteer, elite athlete and for my commitment to Equality and Diversity as a Highly Commended Finalist at the 2020 Asian Women of Achievement Awards.

I was delighted to secure a virtual research job with Dreamsport and then become a PlayerLayer ambassador, this gave me a much-needed boost. The joy of having access to all VNSL matches has also been a real positive. Remote Zoom training for 6 months from March until September 2020, included everything from strengthening and conditioning with the personal trainer to shooting workshops. The stop-start, stages of lockdown and changing environment made it much harder to stay motivated, particularly with what felt like no end goal at times.

As we approach our first match in over a year, a friendly against Leeds Rhinos on the 24th April, I feel incredibly excited and a little bit nervous, whilst hopeful about getting back to some form of normality. As the VNSL coaches have said at the end of the matches, training is not the same as actual competitive match play.

We then have the modified U19s Netball Performance League to look forward to, starting in May, with the Superleague Franchises split into two groups.

I believe lockdown has helped to demonstrate just how important sport is, and the support network that comes with being an elite athlete.” – Ziana Butt