This coming Saturday will be a stunning night of boxing and will see the return of Shannon Courtenay and Ebanie Bridges competing for the vacant WBA World Bantamweight title and Savannah Marshall who will be defending her WBO World Middleweight title. 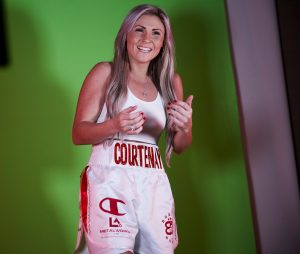 Fight week for April 10th, on the Benn vs Vargas undercard, featuring the chief support fight between Shannon Courtenay vs Ebanie Bridges.

Shannon Courtenay (The Baby Face Assassin) with 6 wins 3 by KO and 1 loss.

Shannon started boxing just to lose some weight but found out she had a real talent for the sport and is now on her way to becoming a world class fighter. Under the banner of Matchroom and with Adam Booth in her corner, Shannon has developed a good skill set, technique and can pack a punch, winning her last fight against Dorota Norek with a KO of the year contender. It was a perfect return after losing on points to Rachel Ball. Shannon got up from the canvas in the first round and with a gutsy performance just lost on points to Ball.

Shannon has stayed away from social media to keep focused and get ready for this upcoming fight on April 10th saying. “I just want to punch her in the face”

It will be a good build up to this fight, especially in the Matchroom bubble, both fighters have big loyal support, shame there will be no crowd but it will be live on Sky Sports and Dazn. 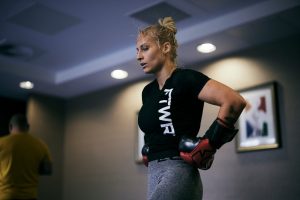 Shannon’s opponent Ebanie Bridges from Sydney, Australia will arrive in Britain with a bang. Ebanie ‘the blonde bomber’ Bridges, a dedicated maths teacher and born fighter will arrive in the Matchroom bubble this week for the WBA world bantamweight championship belt.

Ebanie has a fast growing fan base and a loyal support from the Leeds Utd community after choosing them as her go to English football team. Ebanie is very engaged with her fans through social media and, being her straight forward in interviews, is a key reason on why she has such a big support.

“I love cooking up a storm. And me and Courtenay are gonna put on a very exciting fight”

With 5 fights and 5 wins Ebanie is a strong oppononent.

Rachel Ball was supposed to fight Shannon but caught Covid 19 in January and is still suffering from long term effects of the virus.  So in stepped Ebanie after securing a points win against Carol Earl in Australia.

Ebanie has said that if she wins that she she would like to defend her title against Ball. 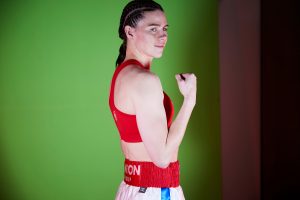 Savannah ‘Silent Assassin’ Marshall from Hartlepool was supposed to defend her WBO world middleweight title against Belgium fighter Femke Hermans. But Femke Hermans had to pull out because of her coach catching covid.

Savannah Marshall has the most relaxed boxing style out there and is a joy to watch with superb skill and a KO ratio of 7 stoppages from 9 wins. Marshall will be hoping to secure her defence and then go on to be undisputed Middleweight champion.

With promoter Eddie Hearn and trainer Peter Fury backing her, I have no doubt she will become the number one fighter in women’s boxing.