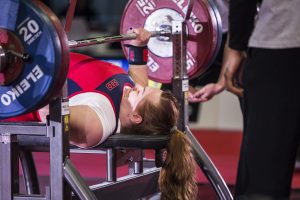 British Weight Lifting has confirmed the 13 athletes who will compete at the Manchester 2021 World Para Powerlifting World Cup from 25-28 March, their first competition since the start of the Covid-19 pandemic.

The event – which takes place at Manchester’s Wythenshawe Forum – will see athletes from around the globe go head-to-head for crucial ranking places at one of the final qualification opportunities for this summer’s rescheduled Tokyo Paralympic Games (24 August – 5 September).

The World Cup, which is returning to Manchester for the second time following a successful inaugural event in 2020, will be the first National Lottery-funded event to be held in the UK since the start of the pandemic, and will take place behind closed doors.

The squad will include a mixture of experience and emerging talent, with Liam McGarry and Kim Dean both returning to Manchester after making their international debuts at last year’s event, following impressive progress at domestic level.

“After such a long period without competition, we’re extremely grateful to be given the opportunity to compete at this crucial qualifier on home soil. The athletes can’t wait to restart their qualification journey and hopefully complete the eligibility pathway for the Games.

“A home World Cup also means we’re able to give valuable international competition opportunities to a number of our young athletes and I’m looking forward to seeing how they perform in the world-class environment.

“Although it’s disappointing that we won’t be able to compete in front of a home crowd this year, we know our loyal GB fans will be cheering us on from home.”

Looking ahead to the event, Rio 2016 Paralympic silver medallist Ali Jawad said: “After everything that’s happened in the last year, it’s a privilege to be given the opportunity to qualify for my fourth Paralympic Games.

“The British public always show such fantastic support for the Paralympics so I hope that I can put in a good performance in Manchester and the other qualifiers, and give people something to cheer about this summer.

“Even though the event will be behind closed doors this time, I know our fans will be following every lift from their living rooms and that will give us the boost we need!”

The event is to be delivered on behalf of World Para Powerlifting by British Weight Lifting, in partnership with UK Sport and Manchester City Council. With welfare of athletes, teams and the event workforce the top priority, organisers are working in close consultation with UK public health authorities to ensure the event is as safe and secure as possible.