Vitality and England & Great Britain (GB) Women’s Hockey have announced one of the most significant partnerships in the sport’s history, as part of a landmark three year deal. 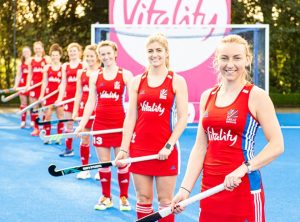 England Hockey’s grassroots participation programme will also be renamed Vitality Back to Hockey, with Vitality working closely with England & GB Hockey to drive visibility of the game and encourage many more people to try out or return to the sport.

The partnership will provide support to the game and further raise its profile as part of Vitality’s ongoing commitment to women’s sport and addressing the significant difference that exists in physical activity levels between men and women*. Through the multiple aspects of the partnership, Vitality, together with England & GB Hockey, will further bring its core purpose to life – to make people healthier and to enhance and protect their lives.

This announcement comes at the start of an exciting year for the sport, with the Tokyo Olympics, FIH Hockey Pro League and EuroHockey Championships.

The announcement also comes at the same time as the insurer announces former Olympic gold medal winning hockey player Alex Danson-Bennett MBE will be joining the Vitality team as a Performance Champion, where she will use her passion and extensive experiences in sport and health to help businesses to motivate and inspire their colleagues to look after and prioritise their health and wellbeing.

Nick Read, Managing Director for Vitality, said: “As we head into 2021, a year full of unmissable sporting events, we are delighted to announce our new partnership with England & GB Women’s Hockey.

“As one of the only sports played equally by men and women, hockey holds a unique position meaning it is well placed to drive engagement in physical activity with women in particular, supporting them to try out or return to the game. There has never been a more important time to be involved in women’s sport at all levels, inspiring many more people to become more active and live healthier lifestyles – which is all in-line with our core purpose, to make people healthier and to enhance and protect their lives.”

Nick Pink, Chief Executive of England Hockey and Chief Operating Officer of Great Britain Hockey, said: “We are delighted and very excited to welcome Vitality as a Principal Partner of England & GB Hockey. Vitality’s commitment to women’s sport, their company values, stature as an organisation and recognition to our wider diversity and inclusion work are exciting and complimenting priorities. The profile of hockey has grown significantly in the last ten years, and to be able to announce this new partnership at such a challenging time speaks volumes for the progress hockey in this country has made both domestically and internationally. We look forward to working with Vitality over the next three years, and developing many opportunities for the sport.”

Speaking about Vitality’s partnership with England & GB Women’s Hockey, Alex Danson-Bennett said: “This announcement is fantastic news for the game of hockey and for women’s sport. I am delighted to be joining an organisation that seeks to raise the profile of women’s sport, and I’m sure this partnership will see many more people get involved in the game, become more active and live healthier lifestyles.”

The Vitality Champions programme forms part of Vitality’s Workplace offering, which aims to support and empower organisations to encourage positive behaviour change within businesses. The Performance Champions work alongside Vitality Champions – who are health and wellness advocates within their own workplace – focusing on Nutrition, Physical Activity, Mental Wellbeing and Understanding your Health.

As part of the Vitality Performance Champions team**, Alex will utilise her understanding of high performing individuals and teams to go into businesses and support people with Vitality Health insurance*** to encourage colleagues to lead healthier lifestyles.

Vitality has been the Official Wellness Partner of England Hockey since 2017, as well as the Title Partner of the Vitality Hockey Women’s World Cup 2018.