Fiona Crackles has been rewarded for an impressive start to her international career by being offered a full-time place in the GB women’s programme in the lead up to the Tokyo Olympics. 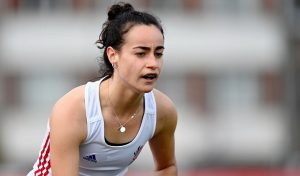 The 20-year-old received her first call up to the senior team in October 2020, making her debut against The Netherlands and featured in all four FIH Hockey Pro League games against the Dutch and Belgium.

Despite her inexperience, the Durham University student produced mature performances against seasoned opponents and was named Player of the Match in the 2-1 victory over Belgium.

She has now been awarded a place in the squad ahead of the Olympics and has started training with the squad upon their return to Bisham Abbey this week.

It’s been something of a whirlwind for the former GB Elite Development Programme (EDP) member but she cannot wait to get going and see what opportunities 2021 present her way.

The 2018 EuroHockey Youth Championships bronze medallist said: “It is very exciting. I guess it’s been very slow to sink in. I still just see myself as someone who plays hockey because they enjoy it. I haven’t really got my head round being a professional athlete so hopefully that will sink in soon.

“After such an amazing experience with the FIH Hockey Pro League I was pretty content, I wasn’t expecting something to come off the back of it so it was amazing to be asked. It took a bit of thought for sure, managing it with everything going on with uni work, but I just knew I had to take the opportunity because with the Olympics coming up you never know what’s going to happen.”

With the FIH Hockey Pro League, EuroHockey Championships and Tokyo Games all set to take place this summer, there could be plenty more opportunities for Crackles to grace the international scene again.

And head coach Mark Hager is looking forward to seeing how she can continue to develop in the next few months.

“Having joined us for some training last year, Fiona showed signs of being a player who could cope well on the international stage and showed an impressive understanding of the game.

“She looked really comfortable on her debut against the Dutch and improved in each game. We were impressed with her ability to defend, turn defence into attack, her reading of what’s going on and her overall athleticism.

“Fiona has a fantastic willingness to learn and a strong competitive nature and we’re excited to see how she develops her game even further technically and tactically.”

Despite the excitement at the opportunity being afforded to her, the former Lancaster HC player is determined to just enjoy herself and make the most of any chances that come her way without thinking too far ahead.

“Obviously the Olympics is the long term goal but I’m feeling incredibly to be in the situation I am, still be playing the sport I love in this crazy world.

“I want to enjoy every day as much as I can while putting a shift in and working as hard as I can. It’s early days and I’ve joined the programme so late so I feel like there’s nothing to lose and a lot to gain.”