Warren Abrahams has overseen his first two-day training session with the Welsh squad, Joining him were his two assistants, Rachel Taylor and Sophie Spence.

Exeter have added three players to their strength, Laura Sheehan, the Ireland winger, and two USA forwards, Rachel Johnson and Joanna Katlinski. Sheehan’s acquisition is of special importance as the Chiefs have sadly lost Jennine Duncan to a long-term injury. 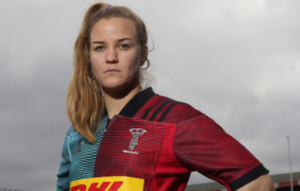 A first voice among Allianz Premier 15s players has been raised querying the absence of testing. Kristine Sommer, the American Quins forward.

We have to wonder what the ultimate reason is for its absence. It is a considerable expense. If it is beyond the RFU’s means to afford it, then what about Allianz itself? How do major insurance companies fare during a pandemic?

As we move into a third lockdown, elite sport is still permitted. The Prem 15s is the one exception in not insisting on organised testing. That underlines its basically amateur nature. It’s only the back-up staff who are – and have to be – fully professional. But they are the people who wear masks on match-day, unlike the players.

When the law adjustments were announced in early October, the RFU stated they wanted ‘to mitigate potential transmission risks and to allow competition to start without weekly testing’.

The many transatlantic players in the Prem 15s were delighted to get some real rugby, and of such high standard. But some of them agree with Sommer. Her standpoint has caused a lot of positive reaction.

Ealing Trailfinders are to form a women’s section. They will use a link with Brunel University to help provide a source of new players.

This positive news is moderated slightly by the question of geography. In September 2018 Wasps experimented by playing a game there against Loughborough. Their ground lies only a mile or two from Twyford Avenue.

In a perfect world you would want an ambitious Championship club further away from the ten centres of excellence that are the Prem 15s clubs.

Fiona Tomas of the Daily Telegraph has offered her top 10 players of 2020. She admitted it was a really tricky choice, and let’s say it was a bit more controversial than others we’ve met over the past few weeks:

There are certs here whom everyone would want to have in their Team of the Universe, others less obvious. Malcolm’s choice is fascinating; how far is she there for leading her Scotland side to a draw against France? Was her play and her leadership so outstanding? Does she deserve the nod over top-quality back-rowers like Claire Molloy and Gaëlle Hermet, another national captain?

And the wingers: both Breach and Joyce have been in exceptional form, but are they clearly ahead of Cyrielle Banet and Abby Dow?

One Kiwi takes her place here, the inevitable Portia Woodman. But how many of us have seen enough games in the Farah Palmer Cup to be sure other Black Ferns weren’t worth a call? Come the next World Cup final – and when will that possibly be? – we may spot others who should have been included.

Lark Davies is probably playing the best rugby of her life for club and country, but are we willing to discount Amy Cokayne in her favour? A brave call.

The two postponed Round Seven games have been set for 6 February:

That date just happens to be the opening round of the men’s’ Six Nations. So presumably it was pencilled in for the women as well. We can draw stark deductions from this announcement.

Sara Cox was slated to take the Quins game. If the 6N did go ahead – now highly unlikely – she might well have been double-booked.

Once more there are some intriguing match-ups here. The Bears and the Chiefs have their men’s teams sitting top of the Premiership. Exeter will be confident of continuing their upward surge against a Bears side that remains inconsistent.

Quins overcame Wasps in the second half of their reverse fixture in October. Wasps can’t expect to beat them unless their forward can hold their opponents in check. If they can, then their backs have the wherewithal to unlock the door.

The two campus sides meet at Hartpury. Sean Lynn hoped to have Zoe Aldcroft back in January; it needs players of her quality to hold an impressive Lightning outfit.

Warriors can look forward to a third win in what has been a lean season for them till now.

Whether all five fixtures will survive to kick off remains to be seen.

Japan introduces a month-long lockdown in Tokyo, to last till 7 February, adding to the doubts that the Games can safely take place as planned.

This represents a major downturn.