Netball NI, the governing body for netball in Northern Ireland, have renewed their partnership with the sport’s leading online retailer in a two-year deal that will see the two working even more closely together. 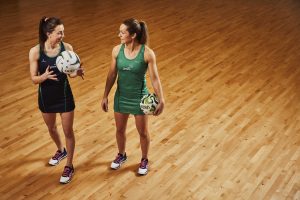 Oldham-based Netball UK, which is celebrating its 20th anniversary in 2020, is the one-stop shop for everything netball and will be the official retail and footwear partner of Netball NI providing the world-leading ASICS netball trainers to their international squads.

As well as supporting the Northern Ireland Warriors squad, there will be exclusive offers to Netball NI members and pop-up shops at the country’s international events in Northern Ireland.

Advice and blogs from Warriors captain and Netball UK ambassador Caroline O’Hanlon will feature on the website, as well as the regular columns from the online shop’s team of netball players and coaches.

It’s a boom time for netball in Northern Ireland with six players from the Warriors squad being picked by teams across the Vitality Netball Superleague for the 2021 season and fans eager to watch them complete alongside and against the world’s best.

Karen Rollo, Executive Manager of Netball Northern Ireland, said: “I am absolutely thrilled to renew and indeed increase our partnership with Netball UK. Having had a successful time as our retail partner, we have now extended our partnership to ‘Official Retail and Footwear Partner.”

“As the ‘go to’ for every club when purchasing netball equipment and the industry experts for netball trainers, we know Netball UK have the knowledge and experience to support our members at all playing levels with their purchase needs, as well sharing our passion and commitment in supporting and growing our sport.

“Like the Netball NI staff team, Netball UK have many netballers within their team so add real life insight to their products, ensuring what they offer delivers exactly what netballers need as we play and train for the sport we love.

“This partnership will see benefits not only for Netball NI and Netball UK, but most importantly for our member clubs and participants.”

Debbie Hallas, Managing Director of Netball UK, said: “I’m delighted to secure our partnership for another two years and have Northern Ireland’s players showcasing our ASICS netball trainers. There’s no better time to be a fan of Netball NI and our sport in general, and with so many Warriors players being part of Superleague in 2021, we’re proud to be able to support their development as we support netball across the UK.