The good news was that spectators were allowed back on to hallowed grounds. 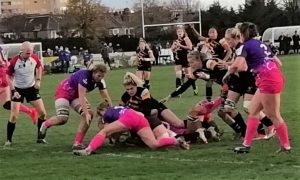 Wasps inches from the line (Photo: B Perkins)

The bad news came on Thursday. A Saracens player tested positive; both she and a number of players she had been in contact with had to isolate. Then on Friday a second intervention, as three DMPDS players suffered the same fate. It means that Sarries’ next two matches are postponed to the New Year. The DMP-Sale game has not yet been rearranged We wish everyone concerned all the best.

Since Worcester were delaying their game with Gloucester-Hartpury till Sunday, we were left with only two Saturday fixtures. Shades of the French Elite 1 programme earlier in the autumn.

This was a high-grade game between two sides desperate to bridge the gap between them and the top two. There were test players galore on both sides, despite the absence of Sarah Hunter, Cath O’Donnell, Abi Burton and Heather Kerr.

Lightning had got the better of the Black-and-Golds too often for the home side’s comfort, and they set about putting things to rights early on.

It took them fourteen minutes to get their noses in front. (7-0)

Jones’ kicking form the tee was faultless, but several of her kicks from hand went straight into touch, as if the construction works under way at Twyford Avenue had narrowed the pitch by a few metres.

Another huge surge by Wasps up the hill finished with Jones sweeping in under the posts. Joy was cut short as the referee ordained the last pass went forward.

An unusual sight then followed. Strong Lightning pressure offered Emily Scarratt a manageable kick to the posts, but it swayed wide. Undeterred, they continued their assault, gaining a sequence of penalties. As the Wasps defence focussed on its left corner, the ball swung fast the other way for Rhona Lloyd to add to her tally.

Another curiosity: Jones drop-out flew wide, but at the scrum in the middle the home pack destroyed the opposition to win a penalty. Most forwards will agree there are so few scrums in a match that practice hardly has a chance of making perfect.

But Lightning finished the half well. More pressure led to a try by Lark Davies. She has scored so many in recent times that she must find it hard keeping trace of them.

Wasps’ will have been annoyed by that score, but they had been playing up the slope. In the second half they took such control that the visitors only rarely threatened their 22.

Wasps made an immediated impact.

Abby Dow escaped down the left, fighting off would-be tacklers. Crucially this time she managed to get an offload away inside to Ellie Kildunne. She outpaced the defence and Megan

Player of the Match: Harriet Millar-Mills

The win puts lets Wasps replace Lightning in third place. This seems very proper as they have scored nearly 100 more points, and their losses came against the inevitable top two.

Your correspondent and England’s head coach, Simon Middleton, both had the bright idea of coming to watch this game. Our judgement proved sound; it was of the expected high quality.

The ball was moved at great pace; several quite outstanding tackles were needed to prevent scores. One stands out: Helena Rowland had to cover a lot of ground to cut down Abby Dow as she flew towards the left corner – another example of the boost the Sevens players have brought to the Prem. 15s this year.

All the spectators were grateful for the huge effort the home club members put in to allow them on the ground.

The England Rugby livestream gurus worked wonders to have the cameras switched there from the Northern Echo Stadium, a good few miles away.

Quins’ strength told in the end to give the result a very one-sided appearance, but into the second half the Bears were still in the game. This was largely thanks to the efforts of their great Welsh winger, Jasmine Joyce. She scored a memorable hat-trick to win the Player of the Match award, a rare tribute to a member of the losing side.

May Campbell, the Saracens hooker, has been named the Allianz Premier 15s Player of the Month for November. She is one of the reasons why Sarries stay at the top of the tree; the international stars are backed up by some very special players. Seven tries in six matches are normally the property of wingers.

This award reveals the sponsor’s welcome commitment to the Prem 15s.

Worcester Warriors were the first to announce that spectators would be admitted to Sixways – another welcome step in the return to normality. Wasps followed suit, but Quins did not. Instead they laid on their own livestream.