The last Friday of October was chosen as the new start day for the RYA National Match Racing Championship Grand Final. An event typically dogged by light winds, that would not be an issue this year. 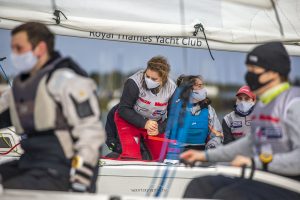 Sixteen skippers were invited to attend having either won their place through a curtailed qualification series or through wildcard invites, which included two past champions to see one of the strongest fields in recent years fighting it out to claim the 2020 title.

With consideration to the current pandemic, the teams were divided in to two groups to avoid mixing and so racing for the first group got underway at 0930 and with every race critical to getting through to the gold group the teams came out swinging. Joe Burns, who had earned his placed through the last qualifier won the first race against seasoned match racer Christian Hamilton, Ali Morrish beat past champion Mark Lees, Alaric Bates beat Harken Youth Champion Robbie King and multiple former champion Nick Cherry beat the highest ranked skipper, Matt Whitfield, fresh from returning from the Match Racing World Championships in Bermuda (he’d only stepped off the plane a few hours earlier).

With the breeze gusting over 20 knots, the racing was tight as spinnakers were kept firmly in their bags but this kept things close as a short lead at the windward mark could be quickly eroded. Slowly the breeze started to drop and just before lunch PRO Tom Rusbridge signalled that the spinnakers could come out and the teams started to test their boat handling. With time needed to get the second group in, Group one was stopped one race short of the full round robin. Robbie King was a clear leader but results were too close behind him with multiple ties to decide who else would qualify through.

In the second group it was Murray Hampshire who took the first win over Sophie Otter, Ellie Cumpsty beat rival Sophie Taylor, Miles Jones beat Matt Lloyd and defending champion, Ted Blowers, beat Andy Cornah. Blowers continued his winning ways throughout the round robin, finishing the day undefeated. Murray Hampshire was just behind him having lost only his match to Blowers, Andy Cornah bounced back from his initial defeat to Blowers to finish the group third with Miles Jones taking the fourth spot in the Gold group.

With the forecast for Saturday making not much racing likely through the middle of the day, the racing was brought forward to make the most of the forecast lull and so group one took to the water to complete their round robin and settle the ties in person. Nick Cherry beat Mark Lees in a thrilling match that went all the way to the finish line before going on to beat Alaric Bates to secure his spot in the next stage. Joe Burns also beat Lees in their last match to take his place. Christian Hamilton beat Ali Morrish and Robbie King beat Matt Whitfield to confirm his place at the top of Group 1.

Sunday was another early start, this time for the Silver Group competitors fighting it out for the final placings which would mean all important World Sailing Ranking Points. Mark Lees showed his metal as a former UK champion and previously ranked 19 in the world as he dominated the Silver group with straight wins. Sophie Otter, clearly disappointed with her first day performance was determined to make the silver group count and finished second, beating Alaric Bates on a tie break.

The gold group took to the water again for the afternoon session and with no chance to move to a knockout stage the pressure was on to win each and every race in the round robin. Andy Cornah, Christian Hamilton and Robbie King continued their winning ways from Saturday while defending champion Ted Blowers suffered his second defeat. As racing continued Andy Cornah was the only team not to suffer a loss but the fight for second was incredibly close.

With six of the seven flights completed, Andy Cornah from the Royal Thames Yacht Club had secured victory but the other teams would need to fight hard to secure second place. After the final flight there was a four-way tie for second place with Joe Burns topping the pile in second ahead of Robbie King in third with Nick Cherry fourth and Christian Hamilton fifth.

The teams quickly packed up before heading ashore for a very quick, socially-distanced prize giving. On receiving the Eacott Trophy for the National Match Racing Championship, Andy Cornah thanked his crew as the real heroes of the weekend, helping him to secure the overall victory.

2020 has been an odd year for all, including match racing, but we would like to thank our sponsors Harken, Marlow Ropes, Hyde Sails and Moody Decking and Services for their continued support and look forward to working with them for the 2021 season which gets underway in January.

Courtesy of the RYA/British Keelboat Sailing