France have picked a large squad of 32 to complete their four autumn campaign. They have two Six Nations matches left over, plus the eagerly awaited double header with England. 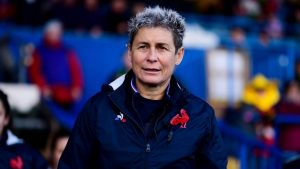 Annick Hayraud has announced these names:

Of course they were massively disappointed to miss out on a first-ever tour to New Zealand, but must make do and mend. This looks a very tidy group, well capable of winning their remaining 6N contests against Scotland (A) and Ireland (H). In theory they could take the title, but that requires Italy to achieve a first-ever win against the Red Roses. You never know.

Hayraud hints that there is still the possibility of adding some Sevens stars to the group; that would be fascinating. It would be even more fascinating if Simon Middleton came to the same decision, but it seems highly unlikely.

If the World Cup had already been pushed back to a later date, then it would have made the change of direction far more probable. A sizeable gap would reopen between the Tokyo Olympics and the World Cup, allowing the talented short-format players to adjust to the mother-game.

For both nations the question of contracts looms large. The two managements want their choices to stick for a year at least. There is no point in paying a player a fixed wage if she is unlikely to feature regularly.

And since money is in such short supply, it wouldn’t be easy to omit a player contracted for two or three years in favour of a 7s player jumping on the bandwagon at the last minute.

It’s hard to read the future – short-term and longer – with any certainty. All European nations are feeling the effects of a second spike in the pestilence. Belgium for example has called off all its rugby till 8 November at the earliest. The UK has added Italy to its list of countries from where self-isolation is now required. The Azzurre are due in Dublin on the 24th. Let’s hope they can slip past that net.

All we can do is trust that the busy autumn programme can take place. It’s been a long wait.