Andrea de Giandomenico has made his choice of 23 players to face Ireland in Dublin on 24 October: 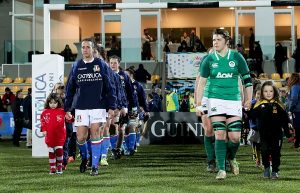 This selection brings the Azzurre back to something like full strength. It’s good to see Manuela Furlan’s name restored after a lengthy injury. Veronica Madia and Aura Muzzo also return to provide more experience and skill. Erika Skofca will have the chance to make her debut after two postponements delayed her opportunity early in the year.

Their first problem is simply lack of match practice. Their international programme was cut short in February as the nation was one of the first to be struck down by Covid-19. Their new season has barely got under way, so there will be a lot of rust to be removed before they line up at Energia Park, Donnybrook.

Their second is the need to keep everyone clear of infection. Five of their number are based in France where game after game has been postponed.

This Round 4 fixture has been brought forward one day to Saturday 24 October from the date originally planned.

The squad will fly over with the men’s team by charter aircraft, an unusual arrangement.

Bristol down the Sharks in Senior Cup Plate semi final.

Tooth and Nail – The Rachael Heyhoe Flint Trophy – Fourth Round.

Simon Middleton and Emily Scarratt have been awarded MBEs.

Tooth and Nail – The Rachael Heyhoe Flint Trophy – Fourth Round.

Ellie Christon to remain at Durham until 2023.

Simon Middleton and Emily Scarratt have been awarded MBEs.