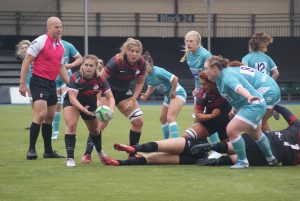 Sarries were made to work for the 34-25 win at Allianz Park with multiple lead changes throughout.

Two tries from Georgie Lingham helping them to a first win of the new campaign. Jo Yapp’s side did take home a bonus point for their valiant efforts.

Red Roses Kelly Smith and Zoe Aldcroft both crossed over as the home side took the bonus point victory 34-14. Aldcroft with two scores, the others from Connie Powell, Hannah Jones and Daisy Fahey. Exeter captain Linde van der Velden scored their first try in the competition.

The league’s other newcomers Sale Sharks Women were also defeated by an experienced Loughborough Lightning.

Just three points separated the teams in the closing moments, but two late tries from Lark Davies sealed the 29-7 win for Loughborough.

In the final game of the day at The Stoop, Harlequins racked up a century as they beat DMP Durham Sharks 103-0.

A host of Red Roses were among the tries including Shaunagh Brown, Jess Breach and Abbie Ward as Quins made a statement to start the latest campaign.

The latest season statistics can be found here and highlights are here.