Sale Sharks Women have revealed their first-ever kit with a new front of shirt sponsor ahead of their opening competitive fixture this weekend.

The squad will debut their new kit in the Allianz Premier 15s – the highest tier of the women’s game – with a newly-assembled squad that include World Cup-winning England captain Katy Daley-McLean. 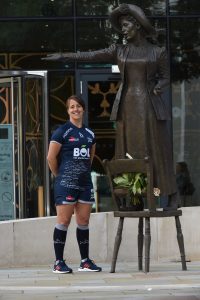 Facing Loughborough in the first fixture of the season this Saturday, the team’s new kit also sees the launch of an exclusive principal sponsorship deal, with the team set to step out with the logo of plant based food brand, BOL Foods, on their shirts. Established in London in 2015, BOL is on a mission to inspire the world to eat more plants. They provide 100% natural, fresh, plant powered food that is high in plant protein and contains up to 3 of the recommended 5-a-day, as well as always being delicious and nutritious.

Joining BOL as an official sponsor of Sale Sharks Women is Acronis, a dual-headquartered (Switzerland and Singapore) cyber protection brand that was unveiled as the club’s official cyber protection partner earlier this year. Acronis will provide both the women’s and men’s teams with access to state-of-the-art cyber protection solutions and analyse collected data with the help of AI and Machine Learning to enhance on-pitch performance.

The new strip has been designed and produced by Samurai Sportswear, which has been the club’s official matchday, training and leisurewear kit provider since 2013. As with the men’s side, the women’s kit is set to be created by Samurai until the end of the 2022/23 season.

The partnerships will support the squad as they look to establish themselves in the league, having signed a number of internationals from countries including England, Wales and Scotland to drive the club’s ambitions to put women’s rugby in the North on the map.

Paul Brown, founder of BOL Foods, said: “We’re so excited to have agreed this new deal with Sale Sharks Women, it is the first time we’ve been involved with an elite women’s team at any level. Being a Manchester lad who played for the academy and having been a lifelong fan, this partnership is close to the heart and I’m looking forward to helping them perform at their very best.

“Our products are an amazing fit for the women’s squad, packed full of protein and can be enjoyed at any time of day. We hope this sponsorship will help continue to raise awareness of sustainable, plant based diets and support the team in their mission to compete at the top of the Allianz Premier 15s.”

Mark Cueto, Commercial Director at Sale Sharks, said: “We’re committed to leading the way in putting women’s rugby on the map and announcing a new kit ahead of our women’s first season is really exciting for us.

“On top of this, securing a principal partner with a brand like BOL – on top of support from Samurai and Acronis – is a fantastic coup for the side and will really help drive the squad forward as an elite team in this country.

“Our women’s side is set on changing the image of the game in the North to deliver more opportunities for female players in the region, and this attitude, paired with the backing from our sponsors, sets us up perfectly for a landmark first season.”