The second part of the Regional Junior Championships took place this weekend – with sailors, parents and volunteers enjoying safe and fun racing at four regattas around the country. 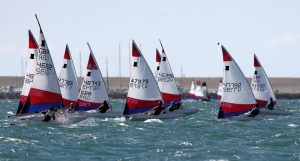 The young racers were rewarded with blue skies and a brisk wind as the second weekend of the Regional Junior Championships got underway.

After a successful opening weekend of junior windsurfing last weekend, it was the dinghies that took prominence with the action mostly taking place in Optimist, Topper, RS Feva and RS Tera Sport classes.

Unfortunately there was too much breeze for racing to take place at the East region regatta at Grafham Water Sailing Club.

Each host venue was Covid-secure, and racing was split to two classes per day to ensure safe levels of competitors, parents and staff required on site.

The fresh breeze presented a challenge for the young racers, one which they rose to demonstrating impressive boat handling skills and determination.

Clubs, volunteers, support staff and race officials also went above and beyond to ensure the events were an overriding success.

Following on from the successful running of the Regional Junior Championships, British Youth Sailing is confident that the upcoming Youth National Championships at WPNSA can be delivered safely and securely.

“It was great to see so many young sailors out there over the weekend, sailing so well in what were trying conditions,” said Chris Atherton, the RYA’s National Performance Manager.

“The sailors were eager and focused when it came to getting out on the water. The level of ability was high and I was really impressed with the sailors resilience given the wind strength and how much colder it was with the arrival of the northerly winds.

“Thank you to all the competitors, parents, volunteers, race officials, staff and of course the host clubs themselves who made these regattas possible.

“We are now looking forward to seeing our youth sailors compete at the Youth Nationals in a few weeks’ time and are confident we can deliver another safe, secure and fun event in Weymouth.”

Results from all of the regattas can be found here.