You wait half an hour, then two come along together.

Only in this case it’s not buses, it’s England’s top Sevens players committing to 15s rugby in the Premier 15s. 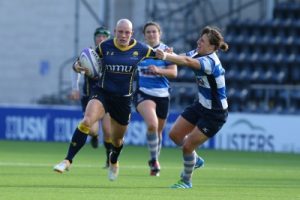 Worcester Warriors announce the signing of two of the Red Roses’ most redoubtable back-rowers, Heather Fisher and Alex Matthews. Both have played multiple times in white shirts and appeared at World Cups. They give Warriors another huge boost as they look to put their underperforming record behind them at elite level.

That brings to five the number of current 7s players to makes the switch. It leaves only eight English players selected to form part of the wider Great Britain squad unaccounted for. The final choices of course lie some distance in the future.

None of them are abandoning their original ambition of appearing at the greatest tournament Sevens has to offer. But like their Black Ferns equivalents they see this move as the only option left for them in the short term. It requires a change of gear: all-out effort for fourteen minutes is very different from the stamina-sapping requirements of an 80-minute game. But the new demands can only help in the long run.

The effect on the Prem 15s is to further heighten the competition. No wonder Saracens announced that they were ‘delighted to announce England international Poppy Cleall has committed herself to the club.’ Given the rising strength of other clubs, you could read that as ‘highly relieved to announce…’ They will need every resource they possess to retain their title.

The big question remains hanging over the whole enterprise: when can women’s rugby start again?

It seems ridiculous when the Premiership is already well under way and spectators might soon see themselves turning up in droves at home matches. But once again the female version of a game has to wait impatiently.