One transfer that slipped under the radar sees Lucy Attwood of Bristol and England move to Lyon for the coming season. This unexpected decision makes one more position available for the string of Welsh caps who have arrived at Shaftesbury Park. Lyon, or ‘Lou’ as they are known, recently climbed up to Elite 1 in France, but their talented players have found that last step demanding. To enhance their prospects they have acquired a second major signing, Annaëlle Deshayes, France’s talented prop forward, who switches south from Rouen University Club. 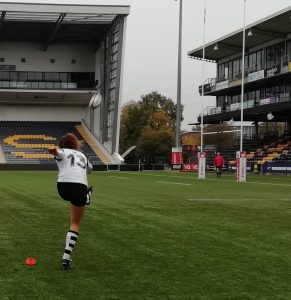 Just ten of the sixteen clubs in Elite 1 have announced player-movements up to now. Other well-known names include Chloé Pelle (Stade Français) and Shannon Izar (formerly of Lille) who go to Chilly Mazarin, the ambitious club just to the south of Paris. Silvia Turani, the Italian prop, goes from Colorno to Grenoble, who lose Emeline Gros to the strongest of the strong, Montpellier. Grenoble battled hard to keep their captain, but the lure of the eternal champions was too much.

Whether this domination of the scene by a single club is a good thing is a moot point. Montpellier seem capable of mopping most of the leading talent, thereby winning every game they contest by a margin. Their end-of-season points balance was 495-65.

Three of the top four Premier 15s clubs have kept low profiles over the summer. Saracens and Harlequins have announced no new signings, Gloucester-Hartpury relatively few (notably Sarah Bonar (pictured above), Hannah Jones and Gwen Crabb) and Loughborough, until 25 August, none. Then they sprang a surprise by announcing the arrival of Courtney Holtkamp, the talented young Canadian from Alberta. She can play lock or back-row, so will no doubt help fill gaps left by Bonar and Jo Brown who has gone to Worcester.

On the other hand Quins’ only published acquisition is their new Head Coach, Gerard Mullen from Loughborough. He has a task on his hand to match the eminence of his predecessors, Karen Findlay and Gary Street, but at least he has a barrow-load of international players to help him find his feet.
Sarries have been very quiet over the summer break. No news is good news?

The other four returning clubs

Darlington and Wasps have been other clubs to avoid weekly announcements of new signings. By contrast, Bristol and Worcester have been heavily involved in the transfer market.

At Sixways Jo Yapp has taken on three more young players, Jemima Moss (18, 2nd row) who comes from their Centre of Excellence, Erin Cameron (18, Worcester CofE) and Lowri Williams (20, Cardiff Met University captain). They join Robyn Wilkins and Hannah Bluck, both Welsh internationals, who made the same move ahead of them.

Bristol of course have taken on what looks like most of the Wales national side.

Elsewhere, Lauren Delany, who had hoped to join Bristol, will instead strengthen Sale’s forces. She becomes yet another Waterloo player to make the move south across Lancashire.

James Forrester has been made forwards coach at Gloucester-Hartpury.

Gone but not forgotten?

One area of the women’s game in England where silence reigns is the fate of the many players in the Development sides. Half of the ten clubs have helped deal with the problem by linking with local clubs to provide alternative activity. It remains to be seen whether the general standards at Championship level will rise in tune with the new Elite division. That was the RFU’s hope.