José Antonio Barrio, Spain’s Head Coach, has announced an extended squad of 40 players from whom he will select a team to compete in the qualifying matches for the World Cup.

For Las Leonas it is a formidable undertaking. They must first make sure of winning the European Championship, which means seeing off Russia and the Netherlands. If that is more than likely, then the next stage is demanding in the extreme: they have to face off against Ireland, Italy and Scotland to be sure of pulling through. The runners-up move into a repechage involving teams from four continents.

Some hurdles have been overcome 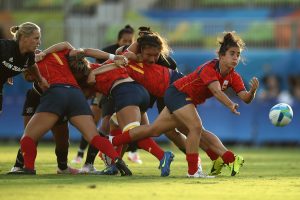 Patricia Garcia (1st R) of Spain passes the ball during a Women’s Pool B rugby match between New Zealand and Spain on Day 1 of the Rio 2016 Olympic Games at Deodoro Stadium on August 6, 2016 in Rio de Janeiro, Brazil. (Photo by Mark Kolbe/Getty Images)

Barrio has all his 7s players available plus players operating abroad; they all have let-out clauses to return to Spain when required. That number now includes two important players, Patricia Garcia and Laura Delgado, recently transferred to Exeter.

Spain’s position is unique: they are the only nation to have been ousted from the 6 Nations, solely because the powers-that-be wanted the make-up of the women’s version to match the men’s. That meant admitting Italy.

Since then las Leonas have won the European Championship repeatedly. In the process they set a new attendance record of 8,900 in Madrid last year when they beat the Netherlands to record a fourth consecutive triumph.

But as long as they are denied a presence in the 6 Nations, they can’t hope to raise their standards by competing regularly against the best in the continent.

Spain has been badly hit by the pandemic, so meeting up for training sessions has been extremely difficult. The first opponents are Russia who have, according to Barrio, been less affected and are therefore better prepared. He has made careful plans to prepare his players as well as is possible. But he realises that the future is still shrouded in doubt. The dates World Rugby announced recently may well have to be adjusted.

The Ironies of the World Cup

World Rugby looks forward to ‘the twelve best teams in the world’ meeting to dispute the ninth RWC. But the need to spread the chances of qualifying right round the globe means that proud claim is shown up as less than the unvarnished truth.

The only way the twelve best could compete together would be to allow only the top 12 ranked nations to take part. That would be a nonsense of course. So several nations of the quality of Spain will be fated to remain frustrated onlookers at the big event in New Zealand.