The UK’s first female Muslim referee, Jawahir Roble, shares her story with UEFA to inspire more girls to get involved in football. 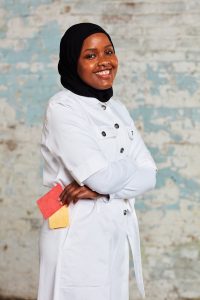 UEFA’s Together #WePlayStrong women’s football campaign has released a documentary with Jawahir Roble, the UK’s first female Muslim referee, as part of our Strong Is… documentary series which follows the journey of some of the biggest names in women’s football to shine a light on the adversities they have faced and how football has played a key role in their life.

In her documentary, which is in partnership with Esprit, Jawahir talks openly about how she became the UK’s first female Muslim referee. Her love for football started in her home country of Somalia where she would play on the beach every weekend, but when the civil war broke out, she and her family had to flee as quick as they could.

She came to London to seek refuge and has grown up round the corner from Wembley Stadium. She found it difficult to make friends when she first came here, but soon found common ground with people through her love of football. Her parents didn’t want her to play the game and instead steered her on a journey to study finance at university, but she kept playing in secret and found an opportunity in refereeing, which she describes as ‘having the best seat in the house’ during games.

Now, she’s one of the most decorated female referees in the country and has won so many accolades for her charity work and passion for encouraging more Muslim women to play sport.