Firwood Waterloo and Richmond, two clubs rich in women’s rugby, are having to adjust to the harsh realities of the Championship, one level below the Premier 15s. It is a very deep step.

Another club that has voluntarily decided to quit its elite status is L’Ovalie Caennaise in Normandy, a region far from the traditional centres of the sport. After suffering two years of repeated losses in Elite 1 the head coach, Jean-François Mouton, explains that their decision to restructure the club in Elite 2 is the sensible response.

His players travel long distances to play their matches. To suffer heavy defeats removes one of the main purposes of playing, enjoyment. He has no immediate objectives except to establish a position in the Championship, gain some victories and restore the pleasure of playing.

The club has close contacts with the local university, and given the rarity of the game in that part of northern France, a main source of players will be students. A training centre was established three years ago; it allows them to concentrate their playing strength on home-grown talent.

If things go well, then a return to Elite 1 is possible, but Mouton is not aiming at that for the foreseeable future. 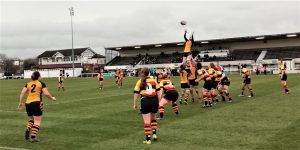 The position of Richmond and Waterloo is hardly comparable to Caen’s. Waterloo might claim they are hardly close to English rugby’s hot-spots, but budding talent is not hard to find. Richmond is the club that has had the heaviest fall. From being multiple champions of the old Premiership and the providers of many scores of capped players, they have rather lost their way. The relative lack of facilities is one reason why ambitious players felt it necessary to move away.

The club has had a succession of head coaches over the past three seasons. Now Mark Cadogan has moved from Quins to take charge. The search is on for three assistant coaches to support him. So far as player recruitment goes, there is little competition for talent wanting to succeed at that level. The only other London-based club is Blackheath, their oldest adversaries, but they come from the other side of the capital.

This is how the Southern Division of the Championship looked before Covid-19 intervened:

Waterloo don’t face competition from local rivals either. This is how the Northern Division finished up:

So Waterloo are the only Lancashire representatives here.

Beth Stott, their distinguished No 10, has just announced her retirement after thirteen years at the club. She recalls the long years of building up to their eventual acceptance in the new Premier 15s league. She emphasises the need for competition at the right level. Once Waterloo reached the top of their division, they received a rude shock coming up against other sides in the play-offs. Each promotion meant raising standards. They achieved their great ambition in 2017, but across three years of endeavour it has proved a step too far.

The problem for all three clubs – indeed every club mentioned here – is the barely bridgeable gap between the elite and the second level. The French choose to call their Second Division ‘Elite 2’, but there are elites and elites.