Young sailors aged between 18-24 can now apply to be part of the next cohort of British Keelboat Academy sailors.

The British Keelboat Academy (BKA) supports sailors aged between 18 and 24 in developing the skills they need to take their keelboat racing to a professional level. 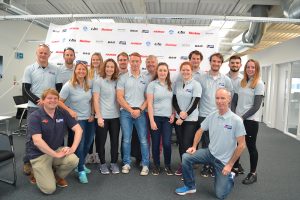 The RYA has been running a programme for young dinghy racers wanting to make the transition to yacht and keelboat racing for nearly twenty years.

It has been such a success that graduates have gone on to hold top positions in some of the world’s biggest and best sailing events such as the America’s Cup, The Ocean Race, the TP52 Super Series, Class 40 and Figaro.

Successful applicants will receive coaching from a multitude of different experts across the sport gaining invaluable skills, experience and knowledge that will progress them in the world of keelboat racing.

“The BKA is a popular and proven environment for young sailors wanting to make the jump into keelboat racing, and we are looking forward to welcoming the next generation.”

The programme is essentially in two parts: the first is a winter training programme where sailors are encouraged to try as many different roles as possible on various different boats so that they can be as rounded and adaptable as possible when they step on a new boat for the first time.

The training takes place in Gosport, London, Portland and Cowes in boats ranging from Elliott 6Ms used at London 2012 though J/70s and 80s up to 40ft yachts. Sessions are broken down by skill sets and look at areas such as spinnaker handling, using match racing techniques to improve overtaking and high-speed tactics and boat handling.

A core team of strong coaches supported by a group of mentors, most of whom are recent graduates of the BKA, will support the sailors through the winter training programme and are always eager to hear questions from all of the sailors. The coaches are supported on various weekends by experts who help to deliver the knowledge that make the small differences on the racecourse.

Once the winter training programme is concluded the second part of the programme really helps to make a difference. The sailors have the chance to work with head coach, Niall Myant-Best, to ensure that their CV is up to date and highlights the areas that will get them the most opportunities to develop the skills they have been practising over the winter. There are many opportunities available to members of the BKA from work placements with professional race teams to opportunities on race boats to gain invaluable experience.

James Crampton, who recently graduated from the BKA, said: “The BKA provided me with great opportunities to network not only with other members and coaches but also the wider professional sailing community with the chance to intern for Team Aqua on the RC44 circuit in 2017 and get involved with a number of teams during the last Volvo Ocean Race. These experiences were invaluable to kick-starting a career in professional sailing once I had finished university and came as a direct result of being part of the British Keelboat Academy.”

With places in the BKA oversubscribed last year by 2:1 we have had to introduce a selection weekend to ensure we have the most appropriate sailors on the programme. Up to sixty sailors will be invited to the selection weekend which will take place on 7 and 8 November and will consist of a day on shore working with experts to learn about areas such as high-tech ropes, deck hardware and handling sails.

The second day will be a day on the water working with the coaches and mentors and getting a chance to try out various roles. The coaches will be observing the sailors throughout the weekend and those who demonstrate a strong desire to learn coupled with a strong work ethic and the ability to work well within a team will be among a group of around forty who will be invited to become a member of the British Keelboat Academy.

While we are currently allowed to deliver programmes such as the British Keelboat Academy, the current climate is such that this may change. Reviews will take place periodically to determine whether the programme can be delivered safely.

More details about the training events and costs can be found at www.britishkeelboatacademy.co.uk.