Great Britain and England Hockey have confirmed the appointment of Katie Glynn and Zak Jones as new Assistant Coaches for their women’s and men’s international programmes respectively. 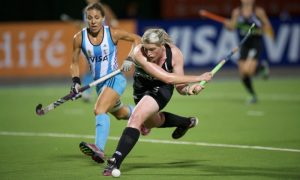 Katie joins following on from her role as Assistant Coach of the New Zealand’s senior women’s team, while Zak arrives after an unprecedented period of success, following a 12-year spell as Head Coach of Wales’ senior men. With a huge year of hockey ahead including the Tokyo Olympics, EuroHockey Championships and FIH Hockey Pro League, they join at an exciting time for our squads.

Katie arrives with a great pedigree as both a coach and player. On the pitch, she amassed 134 caps and 77 goals for New Zealand, representing the Black Sticks at the 2012 Olympics, two World Cups and two Commonwealth Games. She was the nation’s all-time leading goalscorer when forced to retire at the age of just 26 and was named in New Zealand’s 2017 New Year’s Honours list for services to hockey. She soon embarked on a burgeoning coaching career, firstly with her nation’s Under 18s, then leading their Under 21s before assisting the senior women’s team since early 2019.In her new role, Katie will bring her considerable attacking nous to the Great Britain and England women’s programme. With a number of talented young forwards in the programme, Katie’s arrival will give them a further opportunity to progress their skills at the top end of the pitch.

Katie commented: “I am extremely excited to be appointed. The role is an amazing opportunity for me to work with world class athletes and staff that have been successful on the world stage. I have enjoyed coaching against the squad and have always admired the way they play the game. It is a great privilege to join the group and I am really looking forward to adding what I can to continue to progress the squad.”

Women’s Head Coach Mark Hager said: “I’m delighted to have Katie on board, and she will bring the attacking flavour that we’re looking for. Over the last 18 months with New Zealand she has shown an ability to help develop quality goalscorers and to create and maximise attacking opportunities. I’m looking forward to working alongside her as a coach for the first time, I’ve admired what she’s done as a coach at both youth and senior level. Her personality will allow her to develop strong relationships, while challenging all to aspire to the high levels required at international level, and I know the staff and players are looking forward to working with her on the journey ahead.”

In joining the men’s programme, Zak brings a wealth of coaching experience at both international and domestic level. His time with Wales has been nothing short of unprecedented, leading the team to retain their top tier EuroHockey Championship status for the first time in two decades. Furthermore, in the last five years alone he has taken the team from 36th to 18th in the FIH world rankings. He also has experience of working within the GB programme, having assisted our senior men’s team and the Elite Development Programme at a number of tournaments in recent years. Domestically, he has led Buckingham women’s 1st XI for 20 years, helping them win the 2020 Jaffa Super 6s championship, record three consecutive top four finishes in the Investec Women’s Premier Division and claim five Conference West titles.

Zak said: “I am honoured and humbled to have been appointed to the role. Being involved with Great Britain as a coach or a player is the pinnacle and I am incredibly excited by both the challenge and opportunity that the role presents. It is a privilege to be working with an extremely talented squad of athletes as well as an outstanding and experienced staff group. I am really looking forward to assisting the development of the athletes as people, both on and off the field, whilst at the same time striving to enable them to consistently perform and succeed at the highest level.”

Men’s Head Coach Danny Kerry said: “We are delighted that Zak is joining us. Throughout the rounds of the recruitment process he demonstrated the qualities and skills that will complement our team. He brings experience, skills, humility, and a hard-won granular understanding of the current international men’s game through his excellent work with Wales and from within his previous work with GB. We look forward to welcoming him into our team.”

Performance Director Ed Barney said: “Following an extensive two-stage recruitment process, we’re delighted to be welcoming Katie and Zak on board. Through both stages, Katie and Zak were outstanding candidates and this was shared by the external and internal panel members. Katie will clearly bring real on-pitch acumen as well as some exceptional interpersonal skills which we have no doubt the programme will thrive from. Zak will bring a great blend to the men’s coaching team and I’m sure will complement Danny and Kwan. I am sure Zak will be looking forward to contributing to more medal success following on from his Sultan of Azlan Shah contribution back in 2017.”

All being well, it is hoped that Katie and Zak will be in place for Great Britain’s first matches back in the FIH Hockey Pro League in October and November. GB’s women and men’s teams both start with away matches against The Netherlands and Belgium before hosting Germany (almost certainly behind closed doors).

In addition, Great Britain women’s Elite Development Programme (EDP) Head Coach Paul Revington has this week been offered and accepted another opportunity overseas. Barney said: “We are disappointed to lose Paul after his hugely valued contribution over the past few years. Many of the players and staff are very fond of Revs and everything that he has brought to Great Britain and England Hockey. Personally, I have thoroughly enjoyed working with Revs – he has always brought real passion, technical acumen and brilliant balance of detail and ruthless simplicity. We respect his decision to step away having been approached by other organisations and wish him all the very best in the coming years.” The recruitment process for his successor to the EDP will begin shortly.