2021 offers both the top events of women’s rugby inside a couple of months. For elite players all over the world this means making a decision: can I do both; if not, which one do I choose? 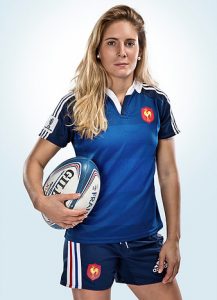 One player has made her mind up: Marjorie Mayans, the great French flanker, famed for the quality of her tackling.

She has decided to opt to return to her home club and devote herself to 15s. She underlines the physical and mental demands made on Sevens players, the need to reach peak fitness for each stage of the World Series. As she sees herself in the second half of her career, she wants to return to her club, Blagnac, and aim to be selected for the World Cup.

As exciting as that prospect is for Annick Hayraud and Samuel Cherouk, it is sad for David Courteix, the head coach of France 7.

It’s a dilemma facing many of her team-mates. At the 2017 RWC no fewer than twelve had represented their country in both formats, that is almost half of them. Mayans sees a number of highly promising youngsters coming into the 7s squad. For them the year’s delay will be totally beneficial. Modestly she discounts what she could go on contributing to the squad.

It will be fascinating to see how this all works out. If we accept that the current dates for the two tournaments are retained, then several dozen players will have to face the decision that Mayans has now made. The lure of the Olympics is still immensely strong; but one player at least has seen there is another solution to be found.