Continuing preparations for their debut season in the Premier 15s, Sale Sharks have made yet more quality signings with the recruitment of Scotland Internationals Nicola Howat and Lucy Winter. 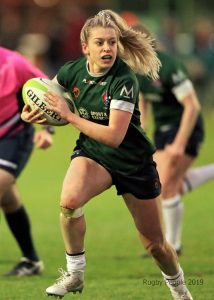 Nicola is a competitive second row whose running lines and ability to offload in-and-around the contact area provide valuable go-forward to every team she plays in. Nicola offers the versatility of being able to play in the back-row and has been capped by Scotland 7 times, including playing in the 2019 Six Nations. Despite being just 23, Nicola brings a wealth of experience after also representing Scotland in the U19s, U20s and at Sevens before joining the SRU Academy programme in 2017. Former clubs include the Howe of Fife and Edinburgh University.

Nicola said “I’m very excited to get started with Sale Sharks, I’m looking forward to challenging myself in Premier 15s competition and thrilled to get to do it with an ambitious team like Sale Sharks Women.”

Lucy Winter, another former Edinburgh University player, is a dynamic, aggressive back-row player with an incredibly high work rate. Lucy, 25, has 4 caps for Scotland and joins us following a successful club season with Watsonians RFC winning the Scottish Premiership in December.

Upon signing, Lucy said “The level of ambition surrounding the programme at Sale Sharks Women has been clear from the outset. To learn from some of the talented players in the squad and test myself in the Premier 15s is an exciting prospect and I can’t wait to get started.”

Head of Women’s Rugby Darren Lamon was happy to confirm both signings “I’m really pleased that Sale Sharks has secured two high calibre players. In terms of Nicola and Lucy, they are both quality people and are very driven not only to develop but to help shape the future of this performance squad for hopefully years to come, something that is important to us here at the Sharks. After watching a lot of playing footage of them, Katy (Daley-McLean) and I can see that both players have got great ability now and also the right attitude to develop further in the future. It is a testament to the standing of this club, that two quality players want to play for the team, and live and work in Manchester.”

For more information on the Sale Sharks Women’s Team and the opportunities available to be involved, please email womensrugby@salesharks.com