Team GB snowboarder and Red Bull athlete, Katie Ormerod, has been talking to RedBull about her almost two year journey from breaking her heel and having her Olympic dreams dashed in 2018, to becoming the first ever Briton to win a World Cup snowboard title earlier this year. 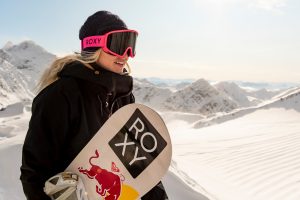 In Katie’s ‘My Greatest Challenge’ piece, she talks about the hell of having to go through seven different operations, the fear of never competing again, switching to a vegetarian diet to help the recovery process, and the ecstasy of winning a Winter Globe.

On breaking her heel in the run up to PyeongChang: In training the next day, on the same rail where I fell the day before, I came off slightly too early again. To look at it, you wouldn’t have thought anything bad had happened. But in a freak accident, the way I landed broke my heel clean into two pieces. The pain was unbearable. I knew straight away that I would not be competing. I screamed for help and was taken to the medical tent where they had to take my boot off to see what the damage was. That was a nightmare. I was in so much pain, I didn’t want anyone to go anywhere near my foot, let alone take my boot off. In the end I had to be given some heavy painkillers and they just had to pull it off. The painkillers didn’t really help, the moment it came off was excruciating, I had never felt so much pain.

On surgery hell: I had emergency surgery where they put two pins in my heel to fuse the bones back together. At that point I was hoping it might take about four months for me to get better. But then there were a lot of unforeseen complications. When my heel had broken, it had started killing my skin from the inside out. That skin had then died and would need to be removed. I had to have a further five operations to fix it using skin grafts. As soon as we were aware of the skin complications, I was told I was facing at least a year of rehab before I would be fully recovered. It was frustrating to hear but I tried to stay as positive as possible. At least I didn’t need further treatment for my broken wrist, as that was a minor fracture and healed by itself. 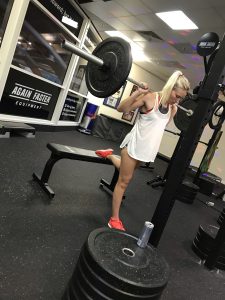 On the fear of never snowboarding again: I couldn’t understand why it was happening. How could I be the strongest I had ever been but still couldn’t walk without a limp? It was a really scary time as I was given the OK to try and snowboard but I knew I wouldn’t be able to do it as my heel was too sore.“If this pain doesn’t go, I might never be able to snowboard again,” I told my physio.

On the seventh operation: Going into the seventh operation I was physically so strong, it was frustrating facing another period of rest and rehab. But because I was in so much pain, I knew it had to be done. Luckily, because I was in such good shape by then, I wasn’t back to square one. I didn’t even need crutches afterwards and could just walk out of the hospital. However, I had to wait few weeks to see if it had worked. The moment I tried doing a calf raise I knew instantly that the operation had worked as I had no pain! It was the most amazing feeling… I knew I’d be able to Snowboard again.

On her parents influence:

My family helped me – they inspired me to keep going. They knew how important it was for me to get back snowboarding. It was my mum, Claire, and my dad, Mark, who had gotten me into it in the first place. They took me to a dry slope when I was three because they wanted us to go on a family ski holiday. When I was five, they gave me a snowboard for Christmas. I fell in love with the sport and I kept going to the dry slopes and getting better.

On switching to a vegetarian diet: I also changed my diet by becoming a vegetarian. My main motivation to give up meat initially was for environmental reasons, but the more research I did, the more I learned it would be really good for me. I had already become more strict about what I put into my body so I could get as much out of my workouts as possible. I wanted to ensure what I was eating was the right fuel to help me heal properly, and I wanted to make sure that my bones were strong. Eating this way helped me feel strong and healthy, so becoming vegetarian was another good thing to come out of my injury.

On getting back on the board: Being back on my board for the first time felt amazing. It was the best feeling in the world. I had been thinking about this moment for a whole year and now I was finally able to do it. It felt so natural and I didn’t even think about my heel as there was no pain at all. I knew then I could handle anything on the mountains. Everything I had been through meant I was now a much better snowboarder than I had been before. I vowed to keep up the gym programme I had been doing as it had made me so strong. Mentally, I felt like I had an advantage too. I’d had a whole year to visualise the kind of snowboarding I wanted to do and the tricks I wanted to do.

Katie on winning a Crystal Globe: I then went on to have the best season of my career. I podiumed at every World Cup and became the overall World Cup Slopestyle Champion. I was then awarded a Crystal Globe, which is given to skiers and snowboarders with the most World Cup points in their discipline at the end of the season. I was the first British woman and the first British snowboarder to gain this accolade. A Crystal Globe is something I have always dreamed about winning; to do it in my comeback year is definitely my greatest achievement so far.

You can read ‘Katie Ormerod: My Greatest Challenge’ in full on RedBull.com