British Youth Sailing has joined forces with the British Sailing Team to launch Project #SailFromHome – a programme of remote learning to unite and inspire young racing sailors over the coming months.

Project #SailFromHome, a collaboration between the British Youth Sailing’s Junior and Youth sections and the British Sailing Team, aims to engage with, inspire and entertain young sailors while they can’t get out on the water. 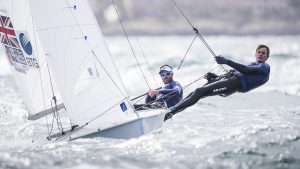 Project #SailFromHome will kick off at 11am on Monday March 30 with the first episode of the Monday Motivation Show vodcast aimed at kickstarting the week with inspiration from the biggest names in sailing.

Week one will begin with two-time Olympian and London 2012 silver medallist Luke Patience alongside British Sailing Team windsurfer Saskia Sills, both of whom have motivating stories to tell.

On Tuesday March 31, British Sailing Team meteorologist Simon Rowell will give his expert advice on weather and tides for Tune-in Tuesday. Simon will deliver two sessions – the first, at 11am, for junior sailors, and the second, from 4pm to 5pm, for youth and senior sailors.

The full timetable will be released at britishsailingteam.com on Monday March 30 and shared on social media.

Oli Woodcock, RYA Pathway Head Coach, said: “We’re passionate about keeping our young racing sailors motivated, engaged and inspired during these challenging times. Just because we can’t get out on the water to sail doesn’t mean the learning has to stop. Through Project #SailFromHome we will offer a way for young sailors to better themselves and improve their racing skills from the comfort of their home or garden.”