South Africa and England have qualified for the ICC Women’s T20 World Cup semi-finals after both secured Group B victories at the Sydney Showground.

The Proteas got the better of Pakistan to record their third victory from three, with Laura Wolvaardt in excellent form with the bat in her first innings of the tournament.

Dane van Niekerk’s side will top the group if they beat West Indies in their final match on Tuesday.

Should they lose then England will take top spot after they ended their first stage with a win over Stafanie Taylor’s side.

Wolvaardt roars to take Proteas through 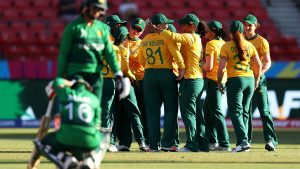 South Africa maintained their perfect Group B record as Laura Wolvaardt’s superb half-century helped the Proteas to a 17-run win over Pakistan.

Wolvaardt had yet to bat in Australia but made up for lost time in style, a plethora of straight and cover drives lighting up the Showground in her 53 from 36 balls.

Classy cricket formed the 20-year-old’s approach, making the most of a tricky pitch which saw none of the four batters above her score quicker than a run a ball.

Pakistan had a similarly tough time with bat in hand, Aliya Riaz’s 39 not out not enough to win in Sydney with Shabnim Ismail, Dane van Niekerk and Nonkululeko Mlaba each taking a wicket.

“It really meant a lot to me, it’s probably the biggest contribution I’ve made to this team if I think about the importance of today and the World Cup,” said Wolvaardt.

“I’ve been itching to get going, but me not batting is the first two games is a good thing for the team.

“I’m not a natural big hitter, it’s been quite a journey for me to get that spot in this T20 side, it’s been something I’ve working really hard on.

“We have a lot of individual match-winners in the side, we’ve spoken a lot about bringing it all together. The way we’re going about our games is really amazing compared to the last World Cup.”

Pakistan captain Javeria Khan added: “We’re disappointed in this game, it was a really good performance in the first 16 overs, but we lagged behind in the last four overs with the ball.

“We weren’t up with the plans, we didn’t execute the plans well and we lost our way in the field a bit.

“With the bat, we need to understand when the best time to accelerate is. We left it too late, but it was a much-improved performance from the girls.

“As we play more matches, we’ll understand the need to accelerate at the right time in the future.”

England joined the Proteas in the last four with a clinical performance over the West Indies, victorious by 46 runs.

Nat Sciver continued her scintillating start to the tournament with a third half-century in four matches as England racked up 143 for five.

England’s spinners were exceptional in response, Sarah Glenn and Mady Villiers both picking up wickets while Sophie Ecclestone led the way with three wickets.

West Indies struggled in their chase, bowled out for 97 with captain Stafanie Taylor retiring hurt after picking up an injury in the middle.

“I think all the girls knew how much of a big thing it was for everyone to be in the World Cup,” said Ecclestone, speaking about the reaction to England’s opening defeat to South Africa.

“I think everyone just trained a hit harder and was having a bit of a laugh and a joke because that’s when we’re at our best, so everyone was really happy and ready to go for the next game.

“I think it was a bit of a wake-up call for us all to be like, right, we’re in the World Cup now, we need to up our game, we did and I’m really glad how the girls have fought back.

“We needed to get West Indies two or three down early. Deandra Dottin and Hayley Matthews are obviously key players for them, so we needed to stick to our plans and bowl stump to stump, which we did.”

West Indies bowler Shakera Selman added: “We haven’t played our best cricket. We struggled against Thailand and we didn’t show up with the bat all in this game.

“The senior players obviously needed to step up and execute, and we didn’t do that in this tournament.

“As a team, we didn’t stick to the basics well enough and we weren’t positive enough while we were out there.

“The only way is forward, we know what we’re capable of as a team and we want to be able to show that, our next series is South Africa in June.”