This may be the most important book on sporting captaincy since Mike Brearley’s magisterial ‘On the Art of Captaincy’ published in 1985. He had certain advantages: a first-class brain – a double first at Cambridge and a first place in the Civil Service exams – and immense charm. 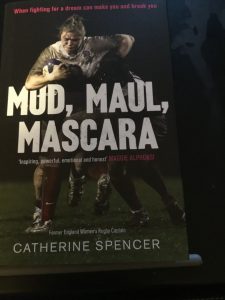 Like the rest of us, Catherine Spencer enjoyed life on a different level, but she had the advantage over Brearley of knowing – eventually – that she was fully worthy of her place in the national side. It’s that last statement that took her so long to accept. It is the thread that runs through her tale: Catherine Spencer, the failure!

In the hardback version the second half of the original title – How I Led My Country, and Lived to Tell the Tale – has disappeared, but gives us a hint of the travails to follow. It reveals the heights and lows attached to the honour of leading your country on the playing field. She writes with ferocious honesty.

While she was in the England Women’s rugby team (2004-2011) that field was still far from level. She belonged to a generation of players following in the pioneering footsteps of the creators of modern women’s rugby, names like Carol Isherwood and Gill Burns, without whom there simply wouldn’t be women’s rugby in this country as we know it in 2020. But despite the rapid advances it made, the sporting world Catherine entered remained far closer to theirs than anything we see today. She would make her way to Heathrow for a team flight armed with her £50 to help defray the costs.

She took over the captaincy of the national side from Sue Day in 2007. She took part in no fewer six grand slams in a starry career as No 8, but the loss of the 2010 final to New Zealand – by the narrowest margin (10-13) of any of the four times it has happened to England – had a devastating effect on her. She was the captain of the team, so suffered even more acutely the sense of loss. Was it her fault the team had failed in this four-year journey to avenge the parallel loss in 2006? It’s easy for us mere spectators to shout a loud ‘No!’ at her now. But we can have little sense of the devastation it could cause.

She takes us through her early life and playing career, where Folkestone RFC plays a central role. She received loving support from her parents and brothers. We all know she was going to become one of England’s greats. One or two of her coaches knew it too. But she couldn’t accept the idea for a long while.

Her gradual climb to international success makes for engrossing reading; then the triumphs and, in her eyes, the disasters.

Retiring was painful, but the career she has carved out by her own determination shows more of her great qualities. It has been dominated by the the women’s speaker agency she established ‘Inspiring Women’, a brilliantly conceived title with a vibrant double meaning.

She reveals the emotional side of her life, the search for love and security.

The book is immensely important not only for its content and message. It is a very rare example of a book by and about a woman playing rugby. Let’s hope it inspires other players of Catherine’s eminence to follow suit, though there aren’t that many England captains available!