After this round comes the break for the Six Nations, then it’s six more rounds that could bring a club the blessings of 30 more points.

This was a last chance for the selectors to have a look around the country to see if they’d missed the odd 2020 Six Nations Player of the Tournament. Not very likely, but the competition for places will be tight, even within the 28-strong squad.

This was an unusual round in that certain clubs lost a number of players to prior demands. Scottish, Welsh and Irish players were all summoned away on international duty – not the Six Nations, but friendlies. Not all Celtic players in the Tyrrells were called up, but enough to cause major changes to team make-ups.

Once more the most crucial games concerned teams in 5th and 6th places. The table is shown below.

Wasps v Bristol
The game was in the safe hands of France’s leading whistler, Aurélie Groizeleau, making another welcome visit to English shores. 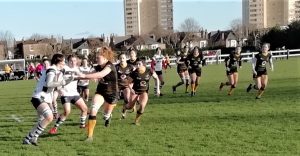 Liz Crake was over the Bears’ line in the opening moments. This mishap may help explain their present problems: their defence is too easily penetrated. Amber Reed restored some balance with a penalty. Then the Bears’ pack showed their first signs of superiority; Sarah Bern drove over the line to take the lead; 7-10.
It didn’t last long. Hannah Edwards made a fine break, off-loaded to Kate Alder who found Harriet Millar-Mills inside to finish off Wasps’ response, 12-10.

That was 22 points inside the first quarter!

Already the shape of the game was apparent: lots of open play, imaginative running and passing, two strong packs going ding-dong, and occasional errors adding drama. A high kick-ahead was unfortunately dropped by the Bristol defence; Abby Dow pounced at once, kicked ahead and was over.

Another Reed kick at goal hit the wrong side of the upright, but Bristol responded with a fine move through the hands of Lucie Skuse and Reed that created an overlap on the wide left for Lucy Attwood; 19-15.

This was a great game for the spectators to watch, less so perhaps for coaches.

Kim Oliver won’t have enjoyed a defensive line-out that went wrong. Macdonald showed how sharp her reactions are by diving on the loose ball; 29-15. Things got worse when a 5-metre scrum for Wasps turned into a second try for Crake; 34-15.

The Bears did manage another try through Abbie Parsons, but it came after a fine dummy and break by Attwood failed to find completion and Ellie Mulhearn thought she was over, but the ref had blown.
Result: 34-20

Claudia Macdonald gave another performance that made you think she might just be the best No 9 in England, despite severe competition.

Each time Harriet Millar-Mills steps on to the field, she looks like England’s first-choice No 8. Together, these two players give Wasps huge go-forward, and HM-M is a wise calming voice during the breaks in action.

Richmond v Gloucester-Hartpury
The score here last year was 26-26, as unlikely as you please. 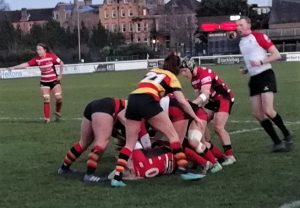 No such luck for the hosts this time round. By half-time Glos-Pury were nearly out of sight, thanks to a bonus-winning four tries. First, Ceri Large made a decisive interception, fed Kelly Smith and the result was what we all expect. Mia Venner scored the second, benefiting from Mo Hunt’s quick reaction to a penalty award. It was Ellie Underwood’s turn on the right wing to chalk up the third after a fine passing movement. Venner created the last score of the half by taking a quick line-out and feeding her skipper who went over.
Half-time 0-20

Richmond’s response was good enough to prevent any further scoring by Glos-Pury’s dangerous backs, but – as so often these days – they found try-scoring themselves a vain pursuit. They got very close on two occasions, but not close enough to tweak the end result. G-H may be asked in the debrief how they were held to a nil-all draw in those last 40 minutes. For a top-4 side, they should be putting strugglers away more easily than this.
Result: 0-20

Quins v DMP Sharks
Here’s a result to shake the foundations: Quins 0 DMP 68. It appeared on the Tyrrells website and was confirmed in the league table: ‘Quins
2 losses’. Fortunately the BBC webpage had things the right way round. The error was later corrected.

Last year DMP managed two fine tries before half-time at Surrey Sports Park. No such luck this time. The loss of their many Scottish internationals
to the Sunday warm-up test against Spain did them no favours.

Quins’ two sharpest pins, wingers Heather Cowell and Jess Breach, were responsible for the unlikely total of nine tries out of the twelve
scored (respectively 4 and 5).
Result: 68-0

Warriors v Sarries
This battle between two bellicose sounding clubs had its expected result, but Warriors had the satisfaction of opening up the leaders’ defences enough
times to gain them a try-bonus.

Things are certainly looking up for the Warriors under the new management team. Vicky Laflin put them in the lead to finish a great move. Laura Keates
added a second before the break, but in between the usual Sarries’ powerhouses had brought them 29 points.

A fascinating detail: the two senior Welsh caps found surplus to national requirements, Carys Phillips and Sioned Harries, were both on the field for the
hosts and both played decisive roles. Harries scored a third try, then another attack by Laflin was halted only by an illegal hand. Result: 7 points.
Result: 26-48

Firwood Waterloo v Loughborough
Another sad foregone conclusion. At least the hosts managed to cross Lightning’s line on one occasion. And – can we believe it? – it came from an
overthrow at a line-out near the start. Try Mhairi Grieve. But that was as good as it got.

We can sense the depth of Loo’s problems when we look at the Development league table. The Second XV have failed to win a match this season.

Lightning were missing their five Scottish players to the international in Spain the following day, but the youngsters took their chance to shine well.
Names like Bryony Field, Morwenna Talling, Iona Antwis and Ellen Ramsbottom appeared on the score-sheet, alongside such celebs as Katy
Daley-Mclean and Emily Scarratt.

Detysha Harper, a coming force in the front row, was decreed Player of the Match.

The postponed Round 10 game between Richmond and Saracens will now take place on 15 February. That slots in between the second and third rounds
of the 6N. It means that Sarries’ multiple Red Roses will be unavailable, but that shortage hasn’t prevented them from securing victories in the past.
Rumour has it they have unwanted test players running the post-match baths.

While English spent the weekend concentrating on club rugby, three of the Six Nations sides were disputing friendlies: Wales entertained Ireland at
Vale Resort west of Cardiff and Scotland flew out to Almeria to take on Spain.

Oxana Bunici appeared in the Richmond XV. She is Moldovan and has a multi-sport career that is worth checking on.

Three of the five referees appointed were female: apart from Aurélie Groizeleau, another test referee Nikki O’Donnell and Rebecca Rees from the Northumberland Referees Society were in action.

Ceri Large made her 50th appearance in the TP15s.

As we come within a fortnight of the Six Nations, this was the listed roll-call of England effectives for Round 12:

So who’s going to predict the England XV correctly?