The 18-year old is called up to the senior squad for the first time and will be a training partner for the new campaign.

Thunder are the defending Champions, having won the 2019 Superleague title in May, and are counting down to the start of the season next month. 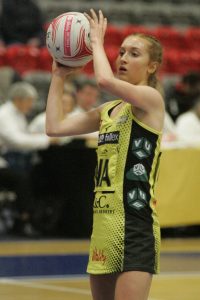 Alicia, who plays at centre and wing attack, has been part of the Thunder youth set-up for some time, and making it to the highest level is something her proud dad never doubted she would achieve:

Paul Scholes said: “We knew from aged 6 or 7 when she first started playing at the ball hall in Failsworth – she had a team of friends and they were hammering everyone! We knew she had ability then, that she was talented and she’s still as dedicated now.”

As well as being in the Superleague squad, Alicia will be part of Thunder’s U21 team and has also been a member of the England U17, U19 and U21 squads.

Paul, who can regularly be seen in the stands at Belle Vue cheering Thunder and Alicia on, praises her work ethic and commitment – but knows that at 5ft4 she faces challenges:

“When you’re smaller – and I was small – you have to find something else. That aggression has to come out and it’s not just aggression, you have to have the ability, the ball skills to get round people who are bigger, stronger and quicker.”

“Thunder are the best club in England and the team that won the Superleague last season. So, the hard works starts now.”