Wasps victorious in first game of 2020

What a way to start the decade! This weekend the swarm headed north to face DMP Sharks for round 11 and battled their way to a convincing win. Dow, West, Rico, Muir, MacDonald and Edwards all put points on the board contributing to the team’s 45-7 victory. 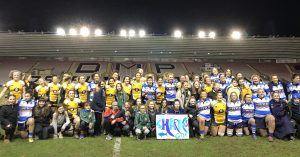 The first 10 minutes of play saw the opposition take possession of the ball, tickling the half way line in attempt to break Wasps defence. 10 minutes in, the defensive efforts of Molloy secured Wasps a penalty. Claudia MacDonald took it quickly and got it wide to Abby Dow who shot over the white wash to score the first try of the game. The second came from the restart, when Gemma Rowland made a break through the midfield setting the team up to take it to the line and Hannah West to take it across.

The next 15 minutes of play saw possession fly between the two teams, DMP Sharks in search of an opportunity to add some points to the board and Wasps determined to extend their lead- and that they did. With 10 minutes left of the half Hannah West went for the double, Hannah Edwards securing the extras. Following in the footsteps of her fellow front row, Isabel Rico was next to add to the score board after spying a hole in the opposition’s defence and flying solo downfield. With one minute left in the half, and a scrum in Wasps favour, Millar-Mills jumped on the try scoring bandwagon taking it over from the base of the scrum leaving the half time score at 31-0.

The second half got off to a slower start, the opposition turning the heat up after the break. 12 minutes into the half, after a high tackle from Dennison, Wasps found themselves down to 14 men. With a quarter left in the game, Wasps regained momentum with a break from MacDonald and Dow taking them into the try zone and paving the path for the forwards to shine. This time it was Maud Muir who crossed the whitewash to widen the gap.

With 10 left in the game, DMP earned a penalty but missed the posts keeping the score at 38-0. But they came back fighting and minutes later powered over the line to put their first points on the board. Determined to deny the opposition the final words, MacDonald, now on the wing, shot through the defence to score the final try of the game, Williams adding the extras.

A strong start to the decade for Wasps, with an immense team effort to secure the win! Next week we head back to the hive and welcome Bristol Bears to Twyford Avenue for round 12.