Once again fixtures were spread over seven hours or more, some due to double-headers with the men’s team. With your private helicopter handy, you could see three full games in succession. 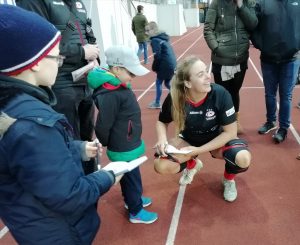 As in Round Nine, today we saw the top four clubs pitted against each other. At Allianz Park Chantelle Miell was called in as a late replacement for Sarah McKenna.

There was a gale blowing from the south which allowed Zoe Harrison to poke the first of many huge punts deep into enemy territory. The Canadian prop Alex Ellis got the scoreboard moving after Hannah Botterman won an important penalty. Though Lightning pressed hard, Sarries showed why are the top dogs: time and again they have the ability to exploit useful positions to gain points. May Campbell finished off a pack drive.

Lightning responded with their first try after two penalties, but Katy Daley-Mclean had the misfortune to see one or two of her plays go wrong. A long low angled kick pulled up short in the wind; Rachel Laqeretabua responded with a long sinuous run and once more possession meant points.

Lightning were using quick-fire bursts with sharp off-loads to counter the wind and catch Sarries off-guard. For much of the first 40 minutes they held them to two scores ahead. With the wind behind them, KD-M could surely manufacture good positions for more scores. But Sarries turned a corner by adding two more tries before Nikki O’Donnell called time for the break. (24-7)

Lightning came back magnificently in the second half to claim a 40-minute win of 24-15, but sadly for them, those late first-half tries did for them.

Still, we had the pleasure of seeing Emily Scarratt run one of her unstoppable lines. It’s remarkable how, from 20-25 metres both she and you know nobody is going to stop her, no matter how many road-blocks lie in her path.

Another England veteran, Sarah Hunter, performed a similar trick from slightly closer in to give hope she will still be at the peak of her powers come the hoped-for World Cup final next year.

But in between Marlie Packer added her usual offering and Sarries reserved the hosts’ right of completing the scoring late in the game.

Once more Lightning produced some outstanding rugby, but they don’t yet possess the all-round ability to see off the best sides.

The runaway win for Wasps represents a huge boost for them. In the return fixture (Round 3) they had to work hard to get a result. Here they showed the power and skill to get over the try-line seven times and keep the hosts waiting till the 70th minute to post their only try. Once more the 8-9 axis of Harriet Millar-Mills and Claudia Macdonald proved decisive.

At the start of the season DMP can hardly have expected to meet Wasps with the same win-loss record, missing out only on two bonus points. But this result sets them back by a sizeable seven points.

Not only Quins could breath a huge sigh of relief as Vickii Cornborough was at last able to resume competition. With a trip to Pau drawing ever closer, her presence in a white shirt is more than welcome.

G-H had the chance to show what they could do under Sean Lynn’s new management, but for both parties the result brought disappointment. Though the margin of loss was relatively small, it’s the ability to win these toughest games that marks out the top-notchers.

They did get to half-time ahead 10-7, but then the Quins pack took over to help them add four tries. G-H got a consolation try at the close, but the result had gone by then. Bianca Blackburn replaced skipper Mo Hunt for the second half – one England No 9 for another.

The Warriors continued their upward path as they overcame the suffering Londoners. It was a close run thing, but two tries from Sioned Harries helped secure a bonus-point win and keep Richmond a long way from safety. It goes to show the enormous influence a powerful No 8 can have on results. She joined Sarah Hunter, Poppy Cleall and Harriet Millar-Mills in having outstanding games

Richmond were only five points down at half-time (7-12) but their defensive alignments left too many gaps. No prizes for guessing that Lydia Thompson provided the bonus-point winning try, but a late reply by Lindsey Mayo kept hearts racing till the final whistle. This result brought Warriors a hat-trick of home wins and added to the tiny number of close margins (7 points or fewer) this season. I make it 7 out of 54 matches.

You’d never guess the travails the Bears went through before Christmas when you see this easy win. But the 48-point margin steepens the hill Waterloo have to climb and they haven’t yet found their walking boots.

The Red Roses had a second boost with the return to arms of Amber Reed after another lengthy lay-off. It had a decided effect on her centre-partner Phoebe Murray, who walked off with the Player of the Match award. She notched a hat-trick among the total of eight tries, several of which came from quickly taken taps. Now they must repeat this standard of play away to Wasps next week.

The missing Richmond-Sarries game still lies in an uncertain future

The table divides unevenly into three groups: the top four who can look forward to indulging in the knock-out stages; the next two who can hope to avoid the consequences of an end-of-season appraisal; the last four who can’t. This means that the most crucial area is positions 6 and 7, occupied by DMP and Bristol a single point apart.

For a pleasant change three of the five referees were female, including two who perform at international level, Sara Cox and Nikki O’Donnell. The third, La Toya Mason, needs no introduction.

Susie Appleby finished her time at Gloucester-Hartpury with a dramatic away win over Wasps. It will be fascinating to see how she and Amy Garnett, both installed at Exeter, go about building a women’s section to challenge the quality on view at Twyford Avenue.

G-H was five years in the making, two spent digging the foundations, then three in big time action. Exeter have just nine months to reach the same level.

Hard to imagine any current Tyrrells player opting to join them at this early stage, surrendering stability and a constant flow of top-class games for the possibility of involvement next season. But money is said to talk.

Appleby’s plans: the application has to go in by the end of this month; they have young local players from Cornwall and Devon already lined up.

With one round to go before the start of the 2020 Six Nations, the roll-call of fit Red Roses becomes even more significant. There was a warm welcome back for Amber Reed and Vickii Cornborough after long absences. In the game of revolving doors Leanne Riley, Sarah McKenna, Lark Davies and Vicky Fleetwood disappeared from view.

The following were listed to play in this round:

The following seven were missing (still):