The Super G competition was up first for alpine skiers Daisi Daniels and Sophie Foster, who finished 18th and 33rd respectively, with Daniels finishing +1.55 seconds behind the eventual winner – home favourite Amelie Klopfenstein of Switzerland.

Daniels, who has already represented Team GB before at the Sarajevo 2019 European Youth Olympic Games (EYOF), said: “It was really sweet. Out of the start the nerves were obviously there but I knew I just had to be confident and send myself down there as fast as I could. At the start I was a bit off [with] my balance and needed to tighten up and I know that going into GS I can be more clean.”

Meanwhile, the men’s Super G competition also started at the Les Diablerets ski resort, with British pair Jack Cunningham and Robert Holmes taking to the slopes. Teenager Cunningham crossed the line in a time of 56:36, leaving him in 26th position in the field, while teammate Holmes recorded a DNF.

All four skiers will be back in action tomorrow, as they tackle the slalom discipline in the alpine combined event.

Ross Craik, Hannah Farries, Robyn Mitchell and Jamie Rankin, got off to a winning start in the mixed team curling event, seeing off France 9-5 in the round robin.

The first few ends were extremely tight until Mitchell, who carried the Union Flag into last night’s Opening Ceremony, virtually sealed the win in the sixth end, scoring four to put Great Britain 8-2 up. Skip Craik then confirmed the victory in the final end, to put the quartet top of the Round Robin after one match. They meet Norway in their second match tomorrow.

The NOC mixed ice hockey event also got underway today with each of the seven Team GB athletes divided in 16 teams (men’s and women’s) made up of 11 players in a squad but the format being 3-on-3.

The event, which is making its debut at YOG, see’s eight men’s teams and eight women’s made up of different nationalities, with team names determined by the colours black, blue, brown, green, grey, orange, red and yellow. Each team will compete against each other once, forming the preliminary round, with the top four teams progressing through to the semi-finals, then the winning teams competing in the gold medal match.

In the men’s competition, only Evan Nauth (brown) was victorious, as his mixed team defeated the black team 13-11 at the Vaudoise Arena. Carter Hamill (blue) and Mack Stewart (red) were both on the wrong side of narrow losses, losing to the grey and orange team’s 8-9 and 6-8 respectively.

Meanwhile, Mirren Foy, Amy Robery, Abby Rowbotham and Jessie Taylor all started their Youth Olympic Games in the women’s competition with Foy (blue) and Robery (black) both coming out on top in their respective matches. It was opening round disappointment for Rowbotham and Taylor, but all seven Team GB athletes return to the rink tomorrow where they’ll contest two matches each on day two.

Day two of the Lausanne 2020 Youth Olympic Games saw competition across four venues and for the first time in these Games, action in France in the biathlon. 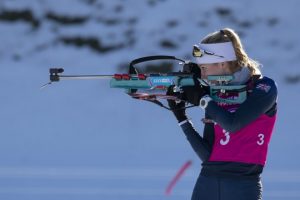 Shawna Pendry got her competition underway in Les Tuffes, France in the 10km race in a very strong 97-person field. An impressive ski and first two rounds of shooting saw her well placed in the top ten but some missed targets late on saw her slip down the rankings but still finish in a very credible 39th position.

Speaking after the race, Pendry was pleased with how it had gone overall: “I was skiing pretty good and the snow was really fast. Shooting I was really happy, first one five out of five. The second was a bit harder as the French girl was next to me and I’m not used to everyone shouting and then last one I was tired and couldn’t hold my rifle as well, so I was less accurate.

“I think today has given me more of a sense of what to expect in terms of the crowds and the shouting/support which I’m not used to. It’s really cool [hearing the support] and that people know me. There’s so many people. We never have this many people supporting which was great today.”

It was a difficult day for some of Team GB’s alpine skiers as Daisi Daniels, Jack Cunningham and Robert Holmes were unable to finish their slalom in the alpine combined event (following yesterday’s Super G), while Sophie Foster put in a strong showing finishing in 23rd place in a time of 1:40.31, +6.57 behind eventual winner Amanda Salzgeber from Austria.

In the men’s competition it was a dead heat with Auguste Aulnette (France) and Mikkel Remsoey (Norway) both crossing the line in 1:28.41 to share gold. All four British athletes will be back in action tomorrow in Les Diablerets in the Giant Slalom, before a second run in the same competition on Monday.

At the Champérey Curling Arena Team GB were unable to follow up their convincing 9-5 win over France in their first match as they lost 5-1 to Turkey in their second game. They have a chance to make amends though as they play Norway in the early game at 9am GMT tomorrow.

In the men’s competition Evan Nauth’s Team Brown sit in second after a win and a loss today, while Mack Stewart’s Team Red won their first game before losing a tight match this evening against Team Green. It wasn’t to be for Carter Hamill whose Team Blue lost both their matches.