2019 lies slap in between two World Cups, so was everything quiet on the rugby front? No!

All around the world women’s rugby is pacing forward. The fifteen tests played out in November helped to boost the number of internationals during the year to the unprecedented total of 75.

But the problems of funding and equality remain.

The Rise of Professionalism

England are setting the benchmark: their elite players are the only ones in the world to call themselves full-time professionals. Their Head Coach Simon Middleton knows that this is an unsatisfactory state of affairs. Professionals v amateurs can be unpredictable in some sports, but rarely in rugby.

Professionalism brings huge problems in its wake. When those new England contracts were announced at the start of the season, no fewer than eight players were found to be surplus to requirements. So that took them back to the days of pure amateurism – still the unifying feature for most women rugby players – of mixing a career with the game. For the remaining Red Roses the lack of competition against sides with similar financial structures can make life difficult in another way. If they lose, the question is ‘How on earth?’ If they win, sceptics ask if this has any meaning.

There are two other countries offering variations of pro-contracts, France and New Zealand. Two other high-ranked unions, Canada and the USA, have ‘Donations welcome’ hanging outside their front door. Smaller (rugby) nations depend on state support that is based on Olympic success, but that is an unfaithful friend.

Still, there are encouraging signs. The Italian FIR is hoping that a government initiative to support women’s sport will come to pass. That would be a huge boost for the 6 Nations team most likely to advance dramatically over the coming years. And Scotland announced a rise in player contracts from eight to ten. Welcome as this news is, it reflects the uneven pace of growth in financial support for women’s rugby.

Further afield a hastily arranged a Women’s Cup was arranged by Rugby Afrique, to provide an African contender for the World Cup. But only four nations felt able to compete, and South Africa were the overwhelming favourites to walk off with the ticket to New Zealand.

Fifteens rugby is fighting the good fight against its younger sister Sevens. The Olympics are the trouble. Football is so widespread that it can put on its own Olympic competition and millions watch. We’re a long way off a parallel competition for rugby, even for men. Only a brief Sevens tournament takes place, but the huge surge of interest it caused in Rio has led more second and third-tier nations to throw their weight behind Sevens. This makes funding for Fifteens hard, if not impossible to acquire from governments who have to watch their purse-strings. 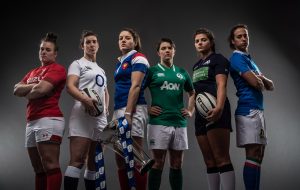 It would be a timely gesture if Guinness added their name to the Women’s 6 Nations Championship. They are in a sort of halfway house at the moment. New sponsorship is long overdue.

With hindsight we can say the outcome of the 2019 version was entirely predictable. England demolished all the opposition it met. The 6N committee seems unwilling to make major (or even minor) changes to the set-up, but if the 2020 version produces a similar set of results, a braver response will be needed.

The scheduling of the tournament could be improved. Why have two matches running concurrently when more thoughtful planning would allow people to see all the games? TV companies weighing up whether to bid for a contract would want the largest audience possible. A thornier problem is whether to arrange matches with a view to mounting tension. As things stand, only France and England are likely to win the trophy, as they have done for twenty of the past twenty-three 4/5/6 Nations since 1996. Why place that match on the first day of the 2020 schedule?

Of course, it is an indignity to the other competing nations to present this argument. But a win there more or less assures the final outcome.

Back in March I tried to investigate the issues involved.  At least this time England have to travel to France where they don’t find life easy. But if they should win that game, the odds are they will run off with yet another Grand Slam. Delightful as that is for all supporters of the Red Roses, it won’t do the Championship any favours. 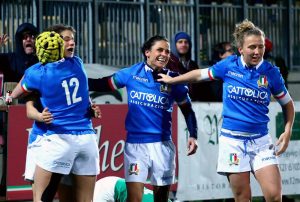 All the six unions involved are raising their standards. But the gaps between them don’t close. Italy’s second place in the 2019 Six Nations was a welcome first. But a subsequent drubbing by England in November showed they too had a long road to travel to reach the top. Andrea Di Giandomenico doesn’t yet enjoy the player-depth he needs to be sure of repeating this success.

Ireland, Scotland and Wales are all working hard to up their game. In the past two years all three have experienced a change in management and the last two have increased the number of tests matches they play. 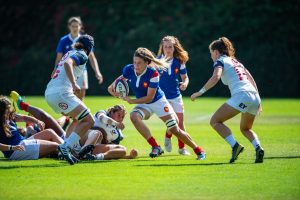 This newly-shaped tournament marked another major step forward in international rugby. One of its drawbacks was that it widened the gulf between these top-5 nations and the rest. If World Rugby had the power to do so, it would be wonderful for the next five in the rankings table (at the time it was Australia, Italy, Wales, Ireland and Spain) to be offered similar favoured treatment.

If a parallel tournament was set-up for next year, could the San Diego experience be bettered? Two blemishes there were the off-field facilities for the players and the tiny attendances. All four of the other nations competing would be able to improve those features, but the operation needs a huge input from the organisers, second only to a World Cup.

The standards of play alone made the enterprise totally worthwhile.

These have really taken off this year. Some nations were competing for the first time in a November setting. Scotland made their first overseas tour, to South Africa. The players returned well pleased with the experience, but sadly their two wins there were put into sharp relief by later losses to Wales and Japan.
Both Japan and Hong Kong undertook tours to Europe and won games. These are essential steps in narrowing the gaps in attainment. Inside Europe the lack of promotion/relegation at the top level means the second-tier nations can only fall further behind the top six. It would help if the RFU reintroduced matches against their European neighbours who lie outside the 6 Nations umbrella. 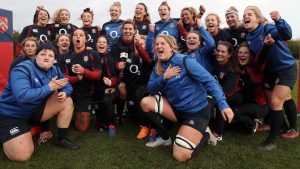 Until seven years ago an England XV played regularly against them. These days a large number of talented players perform just outside the professional bracket, including many Red Roses and the U20 squad. It would be lovely to see them in white shirts again pitted against less familiar opposition. It would do both parties immense good.

Is flat-out professionalism the only route to success? No. The All-Blacks and Black Ferns have proved this over decades. All it needs is a vibrant tradition and the right human material.

But a chest full of gold ingots would be very welcome.

The game between Harlequins and Leinster three days after Christmas represented a huge leap forward for the women’s game at club level. Perhaps the next logical step forward would be a match-up between the winners of the English (Tyrrells) and French (Elite 16) league championships – to take place every year, perhaps in alternating countries.

Clashes between major clubs like Montpellier, Toulouse, Saracens and Quins would surely draw the crowds.

For players who don’t think their talents are being properly exploited in the orthodox game, now there’s Snow Rugby to take their breath away. Russia are the current champions.