England Women took an unassailable 2-0 lead in their IT20 series over Pakistan in Malaysia with a thumping 84-run victory. 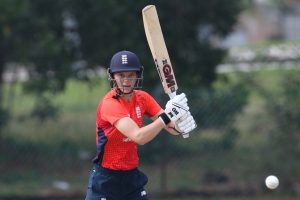 Heather Knight won the toss once again and Jones and Wyatt got to work, putting on 120 for the first wicket. Jones was unfortunate to not reach her maiden IT20 century but will have been pleased to make her second half-century in a row.

Pakistan‚Äôs reply was managed well by England‚Äôs bowlers, with only some lower-order hitting adding some respectability to their total.

Tomorrow the teams meet for the final IT20 of the series. The next time England will take to the field in an IT20 they‚Äôll be in Australia, ahead of the ICC Women‚Äôs T20 World Cup, with Lisa Keightley in charge.

Danni Wyatt: ‚ÄúI‚Äôm really happy to have made 100 caps. There have been a lot of highs and lows along the way but I‚Äôve enjoyed the journey, and it means a lot to get here.

‚ÄúIt‚Äôs great batting with Amy and we were happy to get us off to a good start. We‚Äôd have liked one of us to go on and get a hundred but it was a decent total.

‚ÄúIt‚Äôs tricky with the ball when the chase begins to be unlikely, but the bowlers stayed really disciplined and kept their standards high.‚Äù

Yes, there are lots of fascinating possibilities available to Middleton. The trouble is, the crunch game comes first up. He must pick the side he can trust to produce the goods. In her latest pod Rachael Burford said the No 15 must be safe under the high ball, hence Sarah McKenna. I‚Äôve seen both Dow and Attwood fail in this respect this season. Wing is a major source of strength with Thompson, Breach, Smith and Dow. Hard to leave out a player who scored 2 unforgettable tries in a world cup final against the world‚Äôs best, and played Woodman off the park in Rotorua. Sad thing is: wingers rarely figure on the bench. If they can offer a second option (full-back) they have a chance. That means Dow. A concern is No 7. I think the management prefer specialist flankers. Once Marlie Packer is counted out, that leaves only Vicky Fleetwood with the necessary pace and know-how on the open-side. Of the ones you mention, Cokayne fits the bill excellently. But she‚Äôs 1st-choice hooker. Has Kerr ever played back-row? Beckett was only filling in in the second row, surely. Yes, lots of talent waiting in the wings. Makes you wonder who‚Äôll retain their contracts next year. Harriet Millar-Mills was invited in to join the test squad recently.

Huge apologies for the delay in getting back to you, I‚Äôve just phoned Dartford FC and the match will be pay on the day, it would appear that you can‚Äôt get advance tickets. Sorry it has taken so long.

We are a small group of sports fans who would like to see a little more parity in sports reporting. England women‚Äôs teams have had some wonderful successes in the last years and yet they don‚Äôt get the recognition they deserve. We would like to begin to put that right by making them the focus of our website. You can get in touch with us from this page or via twitter