A half-century from Amy Jones and three wickets for Sophie Ecclestone led England to a comfortable victory in the first IT20 against Pakistan in Kuala Lumpur. 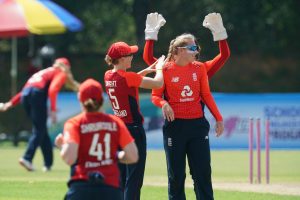 Jones’ 53 included ten fours and was the stand-out innings on a pitch that didn’t suit aggression. She was ably supported by Tammy Beaumont and Nat Sciver, while Katherine Brunt and Heather Knight added some lower-order momentum.

Two wickets in the first over for Freya Davies put England ahead of the game, but as was the pattern in the ODI series, Pakistani skipper Bismah Maroof was resolute and gave her team half a chance of taking victory.

Late wickets for Sciver extinguished any Pakistani hopes of victory and took England 1-0 up in the series.

The second and third match of the series take place on Thursday 19 and Friday 20 December respectively, before England return home. 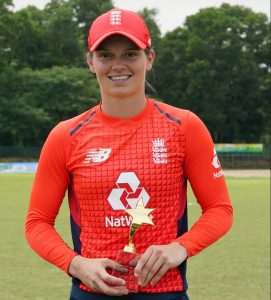 Amy Jones: “It’s not an easy pitch to score quickly on, and I think the opening few overs are probably the best time to bat.

“Pakistan were disciplined with the ball and they didn’t make it easy so I think we did well to get up to 160, but we perhaps would have liked a few more.

“The wickets in Australia at the World Cup won’t be too similar to this but the important skill is adapting and hopefully adapting to these wickets will stand us in good stead for the World Cup.”