The big news is a first win of the season for Waterloo against Richmond (20-10). Huge congratulations to them. For the Londoners this is a most unwelcome turn of events. To put the game in perspective, the hosts have leaked a cool 125 points more than their next worst rivals, So now Loo, Richmond and Warriors lie equal on 5 points

Wasps v Quins
Quins paraded a strong, but not quite complete first-choice side. Vickii Cornborough is still missing and Abbie Scott and Giada Franco were absent. But the league leaders proved too powerful and organized for all Wasps’ efforts. 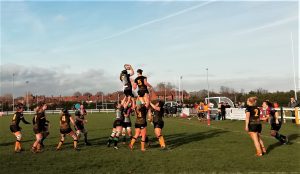 Quins win a line out (Photo: B Perkins)

Wasps gave it all they could, and that was a lot. They had their best moments towards the end of each half. but it took long faultless sequences for them to gain their points. Quins on the other hand have skill and strength all over the field. Emily Scott led them from No 10 with an outstanding performance, and they had so much experience around to overcome the stiff resistance of the hosts.

It took them five minutes to construct a try. Khadidja Camara was stopped dead in her tracks running a reverse line, but the ball was worked out to Jess Breach on the far left. For the rest of the game she had to wait patiently for the ball to come her way.

Wasps’ tactic early on was to kick high and deep, but Quins have the answer to most problems set them, and they counter-attacked with a will. This was just the game they needed before the showdown with Sarries next week. Wasps were awarded a penalty with reaching distance and Lizzie Goulden did the needful.
Three more tries followed in the first half, two to Quins (Anna Caplice and Leanne Riley with a brave dive for the line under the forwards’ hooves) and a riposte by Hannah West. Wasps came alive now, attacking so effectively that Shaunagh Brown was carded close to her own line. A second penalty by Goulden on the 40-minute mark reduced the gap to a mere four points.

Whatever Wasps’ good intentions were, they were undone by the all-round quality of the Quins’ outfit. They managed four tries in the second half, the first to Sarah Beckett, fed by the quick-thinking Riley; the second a penalty try after huge pressure up front; the third to Amy Cokayne on the end of a driving maul; and the last to Heather Cowell a minute from time.

Wasps’ response was there for all to see. They even had a set-scrum driving forward. they kept countering, but slightly inaccurate handling let them down at critical moments.

In the big west country derby at Shaftesbury Park, Bristol came worryingly unstuck. To leak 50 points at home is a real black mark. Glos-Pury can take huge heart from their performance. This season their pack has been able to more than hold its own – something not always achieved last season. With Zoe Aldcroft back in harness and Ti Tauasosi proving a real force at No 8, they can provide their prolific backs with plenty of ball. How appropriate that Mo Hunt scored the final try to raise a second half-century in a fortnight.

It keeps them ahead of Lightning who, despite hitting 50 themselves, can’t be completely satisfied. Warriors posted 19 points in the second half, Lydia Thompson scored two tries, Jasmine Joyce supplied extreme pace, and a well-merited bonus point was gained.

The real battle centres on the sixth position in the table; anything lower and clubs undergo an unforgiving examination at the season’s end. At present Bristol lead DMP by two points. They meet next weekend at Mowden Park.

Zoe Harrison started at No 10 for the first time this season, she and Lisa Martin switching positions. Sarries continued on their merry way with the highest score of the day. Twickenham may not be a safe refuge for the weak of heart next Saturday.

Two of the five referees were women: La Toya Mason at Loughborough and Nikki O’Donnell at Bristol

Emilie Hellgren has left Richmond to join Saracens. A rare transfer in mid-term, but one that underlines a general trend

Quins have awarded 5 study bursaries to:

At last good news about Bianca Blackburn: she returned from a long injury to play for Hartpury’s Development side at No 9.