In October Craig Taylor named the first ever Wales Women’s Rugby League squad for a warm up game against GB Teachers to be followed for their first International against England Lions.
This is Craig’s progress report and a look to the future:
I feel extremely privileged to be leading the first ever women’s elite program. There has been lot of excitement around the squad announcement, and the two 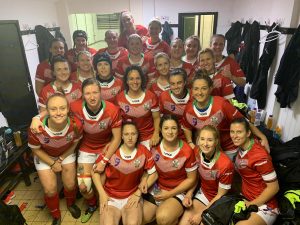 fixtures we have played this Autumn. We have had an amazing amount of views and shares on social media.
The short term goal was to develop a professionalism and togetherness within the Group. Hopefully I can have a real impact on the growth of the female game in Wales. In the contact time I’ve had the girls have been brilliant. Already it feels like we have put solid foundations in place for the future of women’s rugby league in Wales.
My next goal is to support with the development of  a sustainable and competitive domestic competition. There are two very strong clubs in Wales: Rhondda Valley Outlaws and Cardiff Dragons with Bridgend Bulls starting a team this year along with lots of interest elsewhere, things are growing nicely.
With regard to Wales Rugby League they have hired the best training facilities, we have a full staff team assistant coach, S & C coach, Medical and team manager. So the set up is exactly the same as them men with regards to staff and resources. The players have had full induction from CEO Gareth Kear on responsibilities, expectations,  doping rules and regulations. So I honestly can’t fault them the Welsh Board have given me everything I’ve asked for to make a success of the women’s elite program.
Rugby league is obviously behind rugby union in wales in terms of popularity and funding. However they are two different sports. We have a Wales Rugby League team full of Welsh women no heritage or resident ruling players, most of which are union 15’s and 7’s  players with a footballer for good measure. They love rugby league, the speed of the game, the amount of time with ball in hand and how much tackling they get through. There has been a lot of interest in the announcement of this team and I only see both the women’s and men’s games growing. 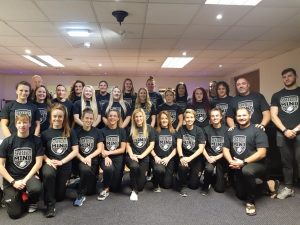 Growth will happen though exposure. Rugby league in my view is the best team sport in the world. I say that as a coach that has also coached rugby union. The more positive exposure rugby league gets in wales the bigger it will become. It would be amazing if in time we can get a team in both the men’s and women’s super league.
In 6 weeks we put a team together that was competitive in its first hit out v GB teachers. Then in the second game went to Lancashire and made history beating the England Lions 20-24 in the first fully capped international. It was an absolute cracker of a game. Just a brilliant advert for women’s rugby league as a whole not just Wales. We have set up a partnership with State of Mind  and become ambassadors for them in Wales. We have also supported the Cardiff food bank with a very substantial donation from staff and players. For me a very busy and productive start.
We are in the planning stage now for 2020 and build up to World Cup 2021. Watch this space there are big things happening with rugby league in Wales – as we say  #TheFutureIsBright
Tags: Rugby League, Wales